IT’S the time of year with goodwill to all men and the scramble to get the Christmas decorations up.

You have probably done the same as myself and spent the first weekend of December untangling the fairy lights from the spare room cupboard and then spent hours trying to work out exactly which bulb is broken. I tend to go for a more mininal less is more approach when deciding what to do in the way of decorations.

One thing is always a given, however.

Not that I have any objection to them but I have cats, two of whom have never seen a Christmas Tree before. To you it’s a Christmas Tree and to me it’s a Christmas Tree, but to the cats it’s a five-foot assault course bedecked with shinny things just begging to be climbed. I’ll never forget my first and last Christmas Tree when I woke with a start on Christmas Eve thinking that Santa had overshot his landing, such was the crash I heard. Checking the living room, however, I found the tree on its side and a frantic and decidedly unfestive feline tangled up the tinsel beneath it and hissing furiously! So this year my decorations will go as far as a Ponsietta…

On the subject of Christmas decorations, I’ve notice that it’s now all the rage to adorn the outside of your house as well. The more devout tend to go for banners with an image of the Baby Jesus with his right leg seeming involved in passing an invisible football. The less devout favour Santa or the Three Kings on ladders and ropes delivering presents. Maybe it’s just me (and it normally is) but rather than looking festive, these figures make most towns and villages look training camps for overweight and particularly inept SAS recruits!

How to avoid Christmas.

If the thought of all this Christmas cheer is getting too much for you. Then here are a few failsafe tips to avoid all the ho, ho. hoing.

Start early by volunteering to come into work on the big day. Then make it clear to everyone you know that they will not be receiving a gift this year. Or a card. And certainly not one of those bloody Jib – Jab emails which feature you as a dancing elf.

Stock up on non-festive fare salads and soft drinks and don’t bother with the decorations.

Trouble is, there is bound to be at least one elderly relative who fails to understand the beauty – or indeed the point – of your scheme, leading to hurt feelings and unwanted knitwear.

Luckily, living up on the lake, miles from the nearest neighbour, it’s pretty easy to treat the Christmas period the same as any other week. The flora and fauna don’t go in for Christmas celebrations as far as I can make out. Though there was a robin on the front terrace last week. Wisely he caught sight of the three cats and decided to hop it.

If you don’t have the luxury of a lakeside retreat, the easiest way is to tell all your friends that you have been invited to a fabulous week long house party in the hills. Then just lock yourself in the house and work you way through that DVD boxed set you’ve been promising that you’ll catch up with. 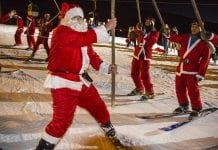 Santa Claus arrives on the slopes at Sierra Nevada 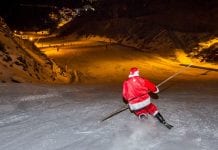 Santa Claus arrives in the Sierra Nevada for festive frolicks