SPAIN’S goalkeeper Iker Casillas has introduced his new son to the world – describing the baby, named Martin, as “the best Three Kings’ gift I could receive.”

Casillas was pictured holding his son, while his wife – TV presenter Sara Carbonero – recovered after a Caesarean operation.

Casillas tweeted: “Hi, I want to share with you the most important and exciting time of my life. The birth of my son after months of waiting. 2014 has come to a good start.” 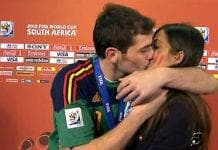