BURGOS residents have resorted to street riots to express their frustration over a reported eight million-euro revamp of the city’s main thoroughfare.

During the three consecutive days of violent protests, 40 people were arrested and 11 police officers were said to have been injured.

The plans for the thoroughfare include decreasing the road’s size by half and taking away free parking spaces in favour of a new, underground, “pay and display” carpark.

One resident, angry at the way the city’s money is being spent, said:

“Considering the era we’re living in and the debt our city has, I find the situation lamentable.”

Burgos is reportedly in debt to the tune of 500 million euros, however the city’s mayor, Javier Lacalle, says the project was the people’s choice.

“This project had the support of 80 percent of the people who exercised their right to vote in the 2011 election,” said Lacalle. “It was an important project put forward by the Socialist Party and the People’s Party.”

Unemployment in Spain is high as a result of the recession and austerity measures are being put in place. In the wake of this, locals in Burgos say they disagree with plunging their city even further into debt. 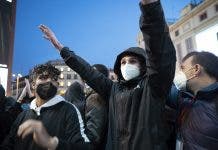 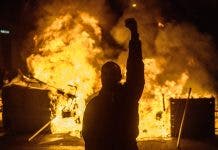