COCA-COLA is looking to close four of its 11 bottling plants in Spain in a move that would affect 1,250 jobs, the company has announced.

The company’s Spanish subsidiary, Coca-Cola Iberian Partners, plans to shutter its plants in the northwestern Asturias region, the Balearic Islands, near Madrid and in southeastern Alicante, the union said in a statement.

Union UGT said it was seeking to negotiate with Coca-Cola to head off the closures, and would launch strikes and demonstrations to press its position.

The company said it would try to place 500 of the affected workers in other positions, and offer the rest early retirement or attractive termination packages.

The news follows that of the latest unemployment figures, which showed the proportion of jobless Spaniards remains at around 26%. 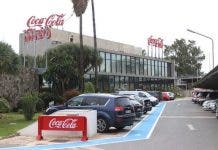