HUNDREDS of people campaigned to save the beautiful Almoraima estate from privatisation on Sunday, with Hollywood star Salma Hayek currently considering the purchase.

The group included 65-year-old Paco Casero, president of the Ecovalia association, who was on his twelfth day of a hunger strike in protest at the Andalucian countryside being sold off and not protected.

The Guardia Civil blockaded the entrance to the estate’s public hotel so protesters convened at the farm gate, where Paco Casero outlined his reasons for hunger striking.

He emphasised the ecological and agricultural value of Almoraima, its importance to the local economy and the Andalucian Forest Plan, which actually targets an increase in public ownership of forests.

Mexican-born Salma Hayek was revealed by the Olive Press to have flown into the estate, near Castellar de la Frontera, by helicopter with her billionaire husband Francois-Henri Pinault at the beginning of February.

The 14,000 hectare estate, a paradise of oaks, ancient pines and wild olives, has been the subject of much controversy since the Government announced it was up for sale.

Hayak is known as a keen environmentalist and is seen by many as the ideal person to promote the beautiful estate abroad.

The EquoAndalucia environmental group released this statement: “We want an Andalucia belonging to the Andalucians, with an economy at the service of its citizens, not big business, where friendly agriculture, environmental care and social justice are developed.

“The natural jewels housed in our land are not ours, we merely preserve them for our children and grandchildren.” 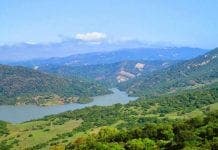 Castle-hopping in the Serrania de Ronda