LINGERIE-CLAD models are being used to teach police emergency first-aid, leading to calls for an explanation from interior minister Jorge Fernandez Diaz.

The series of videos feature models, in only underwear and high-heels, giving each other mouth-to-mouth and chest massage manoeuvres.

A second video shows a man, again only wearing underwear, performing thrusting movements behind a woman as he demonstrates the Heimlich manoeuvre.

A female officer filed a complaint against the ‘sexist’ videos used in the police training course, calling them ‘denigrating and humiliating’.

The town hall in Jaca, in the far north-eastern region of Aragon, helped organise the training course for local officers but denied responsibility for the videos, saying that the police contracted out the teaching of the course to a private firm.

The National Police and the local town hall have apologised for allowing the use of the ‘inappropriate’ material.

Officials said the motivation behind choosing the videos was to use ‘humour’ to make the teaching more interesting.

The secretary general for equality of the regional Chunta Aragonesista party, Leticia Crespo, said that it is ‘nauseating’ that this ‘sexist’ content had been paid for with public money. 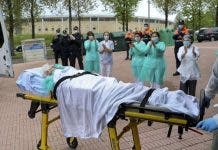