I decided to take a quick trip back to the UK last month, visiting the West Country, or as it is now known ‘Atlantis’. To say that it was a trifle damp in Gloucester would be something of an understatement.

Driving back from the excellent Bulls Head pub in Ewen, which is all low Tudor ceilings and great food, the sat nav system tried to send us on a shortcut under a bridge. This would have been fine if I was driving a vehicle suitable for the conditions. A Trident nuclear submarine for example, such was the level of flooding we encountered. We were forced to beat a hasty retreat in the Nissan Figaro and take the long way back to Cheltenham.

Having not been back to the Old Country in five years, I was amazed by some of the changes. I know that living by the lake means that I’m not up to speed with the cutting edge of technology, but I found there was wifi everywhere – including trains and buses – as well as self service checkout counters in supermarkets and, more importantly, people who knew how to use them. I’ve lost count of the number of times I’ve seen customers in Spanish supermarkets vainly trying to work out how the things work. I was regaling my friends about my discoveries in a now upmarket area of London, which used to be called Queen’s Park but is now known as ‘North Kensington’, and instantly earned myself the nickname of Austin Powers…

Oh and a final word on the flooding. Given the monumental balls up that the Environmental Agency has made this time, what’s the betting that they get it all wrong again in summer and the UK enforces a hosepipe ban?

Flying to the UK of course meant going through customs. Regular readers of this column will know that I have the kind of face that always get stopped by the Guardia Civil, as well as both National and Local police. Even the security guys in supermarkets reach for the walkie talkies when I walk in. So it shouldn’t be a huge surprise to discover that I got the full pat down at Malaga airport on the way out. The fact that I was dressed for the British weather in a Russian style fake fur hat, Australian Drizabone stockman’s coat and Timberland boots made me more than stand out in the queue for the Birmingham flight.

“Yes, but what is it” she demanded

“It’s a box of sand from Tarifa” I replied

“Ahhh. Tarifa sand. How romantic!” they guards said, all smiles, and waved me through. 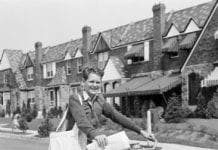