The British territory has always been a tetchy subject for Spaniards, who believe it should belong to Spain.

And they made their views clear to the traveling Chelsea fans, with posters and chants. 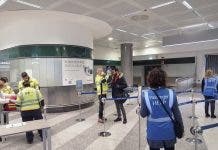 Diexter Thomas - 14 Feb, 2020 @ 16:52
SMUGGLERS will find it harder than ever to bring tobacco into Spain after the authorities teamed up with wholesalers.