SPAIN’S two-party dominance could start to crumble in the European Parliament elections, according to the latest opinion polls.

The ruling centre right Partido Popular (PP) and the opposition Socialists (PSOE) have essentially shared power since the end of Francisco Franco’s dictatorship in the 1970s.

But all that could change on Sunday as voters are turning to anti-corruption and anti-austerity candidates.

Disgust at the economic slump means the PP and PSOE are likely to have the worst showing in a European election in 25 years, according to polls.

The results of the European Parliament elections will provide a valuable insight leading in to the general elections due in early 2016.

“If the smaller parties gain representation, we’ll be seeing an effect on the big parties – especially the opposition will have to change course.”

Surveys predict the PP and PSOE will lose around 10 of their combined 47 seats, where Spain of 54 seats in total.

The Izquierda Unida (IU) is expected to triple its seats to six, while the social-liberal Union Progreso y Democracia (UPyD) could jump from one seat to four.

But unlike many other European countries, Spanish voters are not turning to anti-immigrant or ‘eurosceptic’ parties, expected to take around a quarter of the seats.

While in the UK many Brits plan to protest the economic downturn by voting for UKIP, many of Spain’s discontented voters will choose the ‘Empty Seats’ movement.

This symbolic party aims to win a seat in the parliament, and then not fill it. 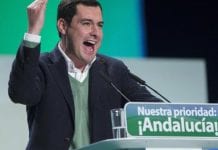