IN a bid to encourage locals to leave their sofas and get some exercise, Estepona Town Hall organised ‘24 Hours of Sport’.

Central to the event was a golf tournament at Estepona Golf Course. Competitors enjoyed a day of play on a great course followed by a chance to chat over paella.

The Waterloo Cup – a charity event in aid of Help for Heroes – also took to the greens of Estepona Golf Club. Popular with expats in the region, the tournament was followed by a prize-giving and food at the Leisure Lounge.

The event raised more than €1,450 for Help for Heroes.

The winners of the Two-Ball Texas Scramble (half handicap) were: Greg and Charlie with 56 points; Derek Statham and Greg Fellows with 55 and Gordon Short and Barry Grant with 52.

Duquesa Golf Club meanwhile, took a 4-0 walloping from Miraflores Golf Club. They were delivered on time by Gaston Golf Minibus but failed to beat the locals. Rob Whately – backed up by his partner Chris – claims he hit at least three good shots during his game.

This month’s joke:
A school teacher was taking her first golfing lesson. “Is the word… Put or Putt?” she asked the instructor. “Putt is correct” he replied. To ‘Put’ is to place a thing where you want it. ‘Putt’ merely means a vain attempt to do the same thing… 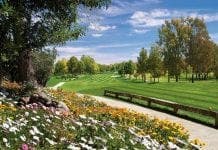 Fair day on the fairway