EVER been stumped for the right word? Let me offer the advice of a master wordsmith: “Don’t use a second-class word because you are in a hurry – leave it for a day or so until the word comes. Let your own feelings show. Don’t use old expressions that are not yours.”

Laurie Lee knew what he was talking about, for he had a gift for golden prose. I met him, appropriately enough, as I walked out one midsummer afternoon. He was sitting on a hillside overlooking the Mediterranean, sipping a glass of wine.

A raffish figure, he smiled a leprechaun smile, his natty cream suit and snow-white hair contrasting with his gypsy-dark complexion. He confessed: “I have been in hospital. The doctor said don’t fly, drink or eat. So I flew down here and immediately felt much better.”

Some moments carve out a place in your memory. Gilded by time, they take on a magical aura. This is the case with my recollection of that sunny afternoon I met the man whose writing drew so many British to southern Spain.

June 26 marks the centenary of Laurie Lee’s birth with many events planned in the UK.

In Spain, where he is less well-known, a solitary plaque on the Almunecar waterfront recalls his bond with that Granada town. The phallic aspect of the pillar where the plaque is located would no doubt appeal to his wicked sense of humour.

As a jobless young man, Laurie Lee left the Cotswolds and bought a £4 one-way ticket to Vigo in northwest Spain. From there, armed with fiddle, blanket and knapsack – plus an urge for adventure – he trekked to Andalucia.

The year was 1935 and suppressed passions seethed below the surface. A civil war was about to erupt – as the footloose Lee was to witness, until being whisked to safety by a British destroyer at Almunecar in July 1936.

Years later he vividly recalled that dramatic summer in a book which was acclaimed as a classic, and helped establish his reputation as a writer and lured many others to follow in his footsteps.

Who could not be seduced by the lyrical prose of As I Walked Out One Midsummer Morning? Laurie’s flair for brilliant, poetic imagery gives life to the very taste and smell of Spain, enough to make the most leisurely of armchair travellers want to hit the road.

My meeting with him took place on his last visit to Spain. The setting was appropriate: a tree-shaded patio near Almunecar, disguised in his book as ‘Castillo’ to protect his Republican friends from rightwing revenge during the Franco regime.

Confessing to being shocked by the changes along the coast, he told me: “I remember how the fishermen used to exchange ancient stories in the bars. But now what have you got? Television shows, phony Hollywood stuff written by drunken scriptwriters. The fishermen are struck dumb. They are reduced to sitting in a corner, mute. The culture has been crippled. You see people in a bar drinking while watching Mass – on television!”

His first visit to Spain was very different. In As I Walked Out… he told how he crossed ‘great gold plains, where the sun rose up like a butcher each morning and left curtains of blood each night’.

Girls were never far from his thoughts. In Madrid, ‘the city of a thousand taverns’, he encountered the sultry Concha (‘I could smell her peppery flesh’) and in Valdepenas he met a girl whose ‘wandering fin­ger, tipped with precocious cunning, seemed the only thing left alive in the world’.

Along what would years later come to be known as the Costa del Sol, he found ‘a beautiful but exhausted shore, seemingly forgotten by the world… S 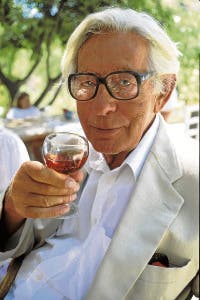 In Málaga, ‘an untidy city on the banks of a dried-up river’, he shared a room at an inn with an asthmatic ventriloquist, four dwarfs and a bird-tamer who slept in top hat and boots. Wandering further along the coast he came to Almunecar, ‘a tumbling little village, backed by a bandsaw of mountains and fronted by a strip of grey sand.’

He returned to Spain in the 1950s, recounted in A Rose for Winter, a feast of bittersweet images of an impoverished country suffering under a dictator – looking back a true classic.

Laurie’s last visit was more light-hearted. As he swigged wine and lunched on paella, his daughter Jessy told me: “The light and the sunshine are good for him. He comes to life in Spain.”

Charm – ‘the ultimate weapon, the supreme seduction, against which there are few defences’ as he once wrote – was one of Lee’s most potent weapons. His wife Cathy, said: “He has an amazing ability to make contact with people. He starts talking to somebody in the street and the next thing he has formed a relationship and they’re old friends.”

Laurie talked to me of his early life, noting: “I left school at 14 so had no higher education. I had to find my own lan­guage and tone of life – an immensely pleasurable occupation. When you go to university, you are inundated with other writers, but I think I was relieved of that pressure. I was not under any influence.”

His reading gave him a taste for what he calls ‘fat-bacon language’, the sort that engraves itself on one’s memory. Lee’s talent for magical phrases recalls Dylan Thomas’s flights of imagination.
“Thomas was an innovator, but I can’t say he influenced me as I started writing before knowing him. I remember he expressed amazement at my accent – he seemed to think I would speak with a broad Cotswold accent. He had a Welsh preacher’s voice.”

So where did Laurie find the right words? “Sight, smell, distance … they’re all in­volved. And in my village we had a good grounding in the Bible and, of course, Shakespeare.”
Laurie was notorious for his roving eye, a trait which his wife Cathy treated with amazing tolerance.

He admitted: “I began by being a poet because I lived an active adolescent life. I ran a dance band and spent a lot of time on a bike looking for girls. Then I realised that poetry was a means I had to declare my love.”

In Cider with Rosie, the classic story of his rural childhood in the Cotswold hamlet of Slad, he recalled his tumbles in the haystacks. Unsurprisingly, one of the first things he noticed in Spain were the ‘strange vivid girls . . . with hair like coils of dripping tar and large mouths, red and savage’.

On that last sun-kissed afternoon – he died in 1997 at 82 – Laurie was still full of zest for life, reliving his experiences in Spain as though they were yesterday.

Draining a glass of champagne, served by our hosts, English painter Michael Still and German sculptress Helga Lambacher, he chuckled: “If this is farewell, I love it.”