IMAGINE a world where women have no control over their own body, a world where choosing to abort the foetus growing inside your womb is illegal.

Imagine this world where the state bans abortion unless the baby is severely deformed, the mother’s health at serious risk or it is the result of rape.

Now take a look around you. You’re in 21st century Spain. And in one month’s time it could really come to pass that clandestine abortion clinics once more raise their ugly heads, completely unregulated and terrifyingly unhygienic.

Before July is over, Spanish parliament will have voted on the bill banning abortion, with most predictions insisting it will come to pass.

In the meantime, the overwhelming majority of Spain continues to stand in defiance, desperate not to be dragged, kicking and screaming, back into the dark ages, when abortions were handled not by tax-funded healthcare, but by the black market.

According to a recent poll, an overwhelming 81% of Spaniards are against the reforms.

The governments of Andalucia, the Basque Country and Catalunya have all already voiced their intentions to oppose the bill – initially proposed by Mariano Rajoy’s ruling PP party in December last year.

Asturias and the Canary Islands have followed suit, branding the proposals ‘regressive’ and ‘an incomprehensible step backwards’.

Incredibly, more than 100,000 of the 118,000 abortions carried out in 2012 would be illegal under the new legislation, according to the Spanish Association of Accredited Abortion Clinics.

The united belief is that the law would not stop abortions taking place, it would merely make them unregulated and unsafe, seriously endangering women’s health.

Just days after the bill was proposed, thousands of activists flocked to Madrid to burn an effigy of Minister of Justice Alberto Ruiz-Gallardon – the mastermind behind the reforms – and demand his resignation.

The streets of Malaga, Bilbao and Barcelona were also teeming with outrage, as protesters demanded the rights to their own bodies.

Womens rights group Femen warned on Twitter: “If they take away our right to decide, we’ll have to abort morality, the Church and everything that limits our freedom.”

They see the bill as returning adult women to the status of minors – unable to make a decision about their own bodies without third party intervention.

“This law doesn’t respect the minimum rights that other laws in Europe do,” said one woman, at a protest outside the Spanish embassy in Paris, labelled The March of the Women.

In the weeks after the burning of Ruiz-Gallardon’s effigy, the flames of discontent spread like wildfire throughout Europe.

As more and more activists gathered in Madrid, Europe-wide solidarity protests took off in Rome, Lisbon, Paris and London.

Banners were simple, blunt and serious. ‘We give birth, we decide’, read one, while another went, ‘Abortion has no place in criminal law’.

One headline-catching protest managed to perfectly demonstrate the notion that the PP are stealing women’s rights to their own bodies.

Hundreds marched straight-faced into regional government offices, demanding that their bodies be entered in commercial registries, normally reserved for cars and planes.

When baffled bureaucrats asked why, the women explained they wanted official certification that their bodies belonged to them.

A return to ‘medieval’ restrictions

Astonishingly, Spain has already shed itself of these ‘medieval’ restrictions once before, following the death of dictator Franco in the 1970s..

A return would equate to a massive step backwards for gender equality and women’s rights.

Spain’s historically strict abortion rules were not finally relaxed until as recently as 2010. The PSOE government changed the law to comply with fundamental rights concerning sexual and reproductive health, established by the World Health Organisation.

The reforms gave women the right to decide whether to terminate their pregnancies during the first 14 weeks, with no third party intervention.

The PP – strongly influenced by the Roman Catholic church – fought this progression from the very start, and was the only party to oppose it.

Despite the successful reform to bring the country in line with 90% of Europe, this was clearly an issue that the PP refused to let lie.

At his very first appearance in parliament in January 2012, just days after taking office, Ruiz-Gallardon announced his intention to reverse the popular 2010 law.

However, times have changed and even many PP voters are refusing to back the current campaign, with polls suggesting as many as 70-80% of the party’s supporters are opposed to it.

“These changes have more to do with politics and ideology than social realities today,” said Francisca Garcia of the Association of Accredited Clinics for the Interruption of Pregnancy – the umbrella group that represents 98% of the country’s abortion clinics.

“From all the data we’ve seen, the number of abortions in Spain is actually on the decline. The PP is simply trying to satisfy the right-wing factions of its party.” 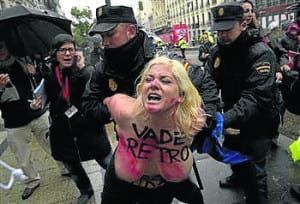 There is an alternative to forced labour or backstreet methods, available only to those with deep pockets – this is ‘abortion tourism’.

Those with the funds will travel abroad to the many liberal-thinking neighbouring countries. More than 32% of women who have had an abortion in the past four months say they would seek the same procedure in another country, according to the Clinics Association for Termination of Pregnancy.

This is a common occurrence in countries with these restrictions already in place.

In Ireland – one of the few countries with restrictions tighter than those proposed for Spain – it is estimated that more than 6,000 women travel to England to have abortions every year.

But despite the unmistakable statistics – and overwhelming wave of fury – Ruiz-Gallardon is still standing his ground refusing to bow to pressure.

“You have my word that neither insult nor cry shall make this minister rescind his commitment to fulfilling the policy of regulating the rights of women and of pregnancy,” he insisted with great pomposity.

In less than a month, we’ll know if he achieved it.