‘If a young man, no matter how insecure, can’t make it with the girls in Torremolinos, he had better resign from the human race’, writes James Michener on the first page of his blockbuster 1971 novel, The Drifters.

It’s an introduction to Joe, one of six young people from across the world who meet up by chance at a Torremolinos bar called The Alamo, forming lasting bonds of friendship as they travel Europe and Africa together on a journey of self-discovery.

They were the backpackers and gap year students of another era lost in time, looking for peace, love and adventure in the days when Torremolinos and Fuengirola meant dope, LSD, topless Scandinavian girls and a permissive society.

For anyone interested in a snapshot of life on the Costa del Sol in the decade of free love and flower power, it’s a must-read.

There are still people living on the coast today who remember Harry’s Bar in Torremolinos, on which The Alamo is based, and its owner, the irrepressible Harry Hubert. In fact, it still exists today in another of its many reincarnations.

Every July, back then, when the Costa del Sol was little more than a cluster of fishermen’s cottages, itinerant adventure-seekers from all over the world would drift into Harry’s Bar, from there to embark on the annual pilgrimage to Pamplona. 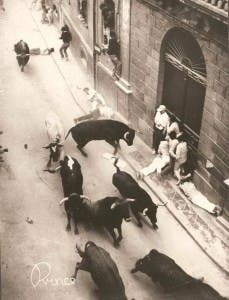 Harry’s Bar was the heartbeat of the expat scene on the Costa del Sol throughout the 1960s and ‘70s.

The bar was decorated entirely in tribute to Pamplona’s famous San Fermin bull run, which was already enjoying literary fame from Hemingway’s The Sun Also Rises. There were bulls’ heads mounted on the walls, plaques from San Fermin paneling the bar counter, pictures and posters from the event everywhere. Pride of place was given to a letter from Irish-American bull-running legend Matt Carney, signifying the lifelong bond of friendship they shared (pictured ____).

Without Harry Hubert, the bar’s Brooklyn-born owner, the book could never have been written. Much as Michener draws on Torremolinos for inspiration, his novel is also heavily based on the friendship that developed between Harry and Matt Carney, also a central character in the story.
Draft-dodging and bull running

Harry, the San Fermin aficionado, connoisseur of San Miguel beer and serial philanderer, became Joe, Michener’s central character in The Drifters. Joe is The Alamo’s American owner, a pacifist who dodges the Vietnam draft by fleeing to Spain. Matt Carney is the model for the novel’s seasoned bull runner, Harvey Holt, who introduces Joe to the magic of the high adrenaline sport.

Michener writes that Holt always ran the bulls with a grin on his face, and it’s true: the real Matt Carney could not help but smile as he evaded death on the Estafeta, the last and most treacherous road of the corrida.

Unlike Joe, however, the real Harry was never a draft-dodger. Born in 1932, he enlisted as a Marine in the Korean War at 18, just shy of the legal age for joining the military. After the war, living on a Veterans Association disability pension, Harry drifted into Torremolinos where he used the money to open up his first hostelry, Bar Central.

This bar, still alive and well in Plaza de la Gamba Alegre, has changed hands multiple times – so many times that Harry Hubert’s name rings hollow in the ears of the establishment’s current bar staff.

When Harry ran the bar, it was the stuff of legend. The music continued long into the early hours when there was no one left to dance to it; the beer flowed, often freely, when Harry was too drunk or having too much fun to keep tab; joints were lit well into the night. The bar became a magnet for American, British and Swedish girls bitten by the travel bug and attracted to Torremolinos by the sunshine and the cheap cost of living.

To all those who knew him, he became an icon of almost religious significance. When asked about what kind of guy he was, most friends let the stories speak for themselves.

Realtor John Harper knew Harry for 20 years. When I asked him for reminiscences, his eyes lit up as he started to tell me how Harry got demoted in Korea.
“He was asked to clean the latrines and he said ‘let’s do this the easy way’ and chucked a grenade into the lot of them.”

Then there was the time when Harry was drinking in his bar, as usual, and two Scandinavian girls walked in, asking if he remembered them. John delivers the line as if Harry was speaking, adopting  his gruff, no-bull Brooklyn accent: “I said to them, ‘no I don’t’ and they said ‘But Harry, we were here last year on holiday, you slept with us,’ and I said ‘Oh, yeah. You was Wednesday and you was Thursday’.” 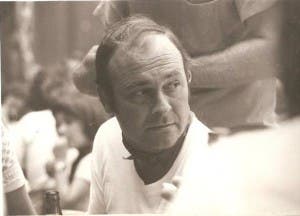 But maybe it’s best to let his old pal, Matt Carney, speak for Harry. In a tribute he wrote called Insect Telepathy, he tells the story of a butterfly Harry found stuck to the windshield of his car, still barely alive.

‘Harry took a piece of paper and very carefully disengaged the stuck physique,’ he wrote, and for the whole day, ‘the butterfly stayed with him’.
The butterfly, just like everyone who met him, couldn’t resist Harry. It fluttered around his face and wouldn’t leave him alone for the rest of the night.

It is from this iconic bar in Torremolinos that the six adventurers in the novel set forth – peseta-poor but rich in company – to witness the spectacle of San Fermin and, of course, start the party all over again.

They arrive in Pamplona – more than half-way through the novel – at what Harry Hubert’s friend Jesse Graham calls the “hardest hotel to get a room in during ‘the season’,” but to which, of course, the well-connected Harry had keys.

Notoriously Hemingway’s favourite lunch spot (he ordered the cod ajoarriero), Marceliano’s was a pension ‘whose joys would not translate into a travel brochure’, but ‘people would do literally anything to get a room there.’ And every July 3, before the running of the bulls, the owner would clear every inhabitant out of the hotel just so that Harry could fill the rooms with his personal entourage of 30-or-so travellers, including Matt Carney.

“It was a constant gutter party there,” he says. “Maybe the most classic place in Pamplona. Because it was near the start of the encierro, all the runners would gather outside and drink caldo (broth), and it’d be busy at all times of day.”

Before he became a San Fermin aficionado, Matt also opened a bar on the Costa del Sol, which Harry invested in, but the police shut it down for the excessive drug use on the premises.

Harry’s Bar stayed open until his death in 1993. From here, every year without fail for nearly 30 years, Harry and his gang set off for Pamplona from the Costa del Sol, cementing a permanent bond between San Fermin and Torremolinos. 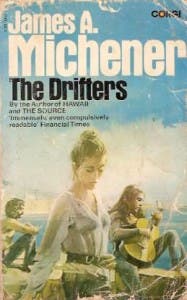 James Michener is the Pulitzer Prize winning author of Tales of the South Pacific (1947), on which the famous 1958 musical was based. It wasn’t until decades later that the novelist took an interest in the Costa del Sol with The Drifters, published in 1971.

After its release it quickly shot to the top of the New York Times Bestsellers list, putting Torremolinos on the map for millions of readers, many of whom became bitten by the travel bug just like the characters in the book.

The story is narrated by Joe, whose journey is loosely based on Harry Hubert’s. A 20-year old student at the University of California, he drops out to dodge the Vietnam draft, hitchhiking first across the U.S., and then making his way to Torremolinos, where he takes over The Alamo bar.

Here he meets 18-year-old Britta from Norway, who arrives on holiday but decides to stay, taking a job as a barmaid.

They are soon joined by African-American university student Cato Jackson, who has fled Pennsylvania after his girlfriend was stabbed.

The gang is completed by Yigal, a young Israeli who fought in the Six-Day war; Gretchen, a Bostonian who was sexually assaulted at riots surrounding Eugene McCarthy’s nomination; and poor little rich girl Monica, from England, whose father is a titled diplomat. Later, the sixsome meet Harvey Holt who opens their eyes to Pamplona.

After the wild success of The Drifters, Harry Hubert received a letter on behalf of Michener, granting him his ‘full legal, moral, and spiritual blessing’ to rename the bar ‘The Alamo’ in order to boost trade. But most of his friends were much more interested in the real-life Harry than Michener’s version. And Harry, who cared little for money, kept the bar under his own name.