WITH Spain gasping from the worst spring and summer drought in 157 years, some much needed rain is finally upon us.

Precipitation has been so scarce in southern Spain that people were wondering if the heavens were operating a closed-shop policy but now they look set to open again.

Olive oil production is down, wildlife parks are seeing their bird populations decrease and secondary school students are refusing to work in the soaring temperatures.

And it gets a whole lot worse in Alicante, which has seen the worst rainfall figures in Spain this year and labelled the driest populated place on earth.

Seeing its lowest rain levels since 1857, it is little surprise that most living organisms are dying, including the most hardy of almond trees, with 180,000 tragically dying this year alone.

“This is the worst summer of my life,” says José María García, who works at the Santa Fe wetlands, a privately owned nature reserve on the outskirts of Santa Pola. “The pools are almost empty now, and the drought is ruining the water.”

Meanwhile in Valencia, more than 1,500 secondary school students have protested against the Department of Education as classroom temperatures reach an excruciating 45 degrees Celsius.

And Malaga has not escaped with temperatures at record-breaking levels – an average of 35 degrees for first half of September – eight degrees higher than the month’s expected temperature.

It is so dry inland that locals have been bracing themselves for a spate of forest fires, particularly as it seems apparent that there are a number of arsonists at loose.

But now Spain’s weathermen are offering a drop of hope… they are forecasting wetter weather over the next few weeks.

Northern Spain has seen it’s fair share of thunder and lightning this September, with the Basque city of San Sebastian experiencing the most spectacular of storms and Alberto Contador’s victory at the Vuelta a Espana hit by torrential downpours in Santiago de Compostela this weekend.

But now meteorologists are predicting similar conditions for the rest of Andalucia, with a storm system pushing it’s way from the Atlantic into southern Spain.

Although the prospect of rain is welcomed, there is a serious threat of flash flooding as the parched earth may not be able to absorb the quantity of water.

Although tourists and resident sun-worshippers have revelled in the prolonged heatwave, Spain’s olive farmers have had to watch their crops wilt and their profits shrivel in the arid conditions.

Andalucia’s olive harvest is predicted to be down 40% on last year’s 1.77 million-tonne yield unless the rains come soon.

However, farmers have warned that too much rain could be worse than none at all, due to the damage caused to crops by flash flooding.

Oddly, it is not all doom and gloom, with courgette farmers in Almeria and mango growers in Malaga rejoicing, as the warm, dry weather has sped up the growing process.

One courgette plantation in Mojonera is planning to expand production by 25% while the mango harvest in Axarquia is expected to surpass 20,000 tonnes for the first time ever.

Another impact has been on the local bird population.

While European tourists have flocked to southern Spain in record numbers, our feathered friends have flown off in the opposite direction as their water supplies diminish.

Huelva’s Donana National Park – which has seen excessive temperatures all summer – is home to hundreds of bird species, however, the lack of rain has seen its avian population decrease by over 50% this year as birds search for wetter climates.

Autumn and winter rains should see the birds return to the area, but the longer the drought goes on, the less likely that becomes.

When it comes to climate, Spain is largely divided… and the old adage ‘it’s grim up north’ holds true.

The country is split in half – weather-wise – by the Cantabrian Mountains, which separate the country into two clear climatic zones, with the cooler rainy Spain to the north and warmer dry section to the south.

In the north-west corner of the country, Galicia averages over 1000 mm of rainfall a year spread out over 131 days.

Meanwhile the city of Almeria in the opposite corner averages less than half the number of rainy days with only 220 mm of rain falling across 57 days.

Curiously despite the drought in the south and west, the Galician city of Santiago saw rain for the first 41 days of 2014 – making it the wettest start to a year on record.

In contrast, Sevilla averaged 38 degrees in August and rarely dipped below 30 throughout the summer. (See graph)

Central areas such as Madrid and Valladolid see the biggest jumps in temperature, rocketing up into the mid 30’s for July and August and then dipping down to single figures for the winter chill.

It is the same in some Andalucian towns like Ronda or Granada, which can often see temperatures soaring into the 40s in summer, and easily dropping to minus 10 or more in winter.

Despite the difference in conditions, the weather debate runs throughout the north and south. While people of the south cry out for much need showers, their northern counterparts plead with the heavens for some respite.

As autumn approaches both north and south may soon be treated to somewhat ‘British’ conditions. 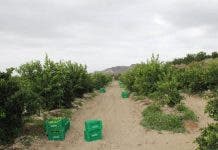 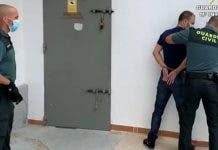