MILITANT squatters are setting their sights on Spanish properties owned by the world’s largest private equity firm to ‘further legitimise their fight’ against lenders’ roles in Spain’s housing bust.

Squatters have been occupying foreclosed properties and bank branches in protest against the country’s flawed lending structure.

The firm also bought 1,869 government-subsidised rental apartments from the city of Madrid for €125.5 million last year.

A group known as PAH is claiming Spain’s squatters have the right to target Blackstone-owned homes since the bank that issued the loans was nationalised.

Maka Suárez, a PAH spokeswoman said these homes ‘belong to the people, not Blackstone.’

The Blackstone deal is one example of the hurdles US firms face as they seek out real-estate opportunities and distressed debt in southern Europe. 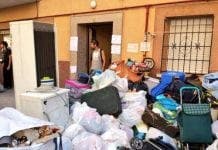