IT is a rainy Wednesday night in October and a sixth couple has just been turned away from a romantic candlelit dinner.

This is not central Marbella, but Cocomo on the N-340 in Benamara, one of the true dining success stories of the last decade.

Out-of-the-way, unpretentious, but completely oversubscribed, it is clear that this popular local is definitely getting it right.

“We are getting 60 at lunch and 60 at supper, which is about as much as we can happily deal with,” explains Maitre d’ Sally, who is juggling big style, having just had a baby to add to two others.

“We would sooner turn people away than weaken our offering,” she adds.

It is no surprise then that on arriving 25 minutes late for my 8pm table I am told I might have a ‘bit of a wait’. A table of nine middle-aged ladies has just arrived and maitre has to deal with them first, she tells me. Fair enough, I figure.

But soon I am nursing a nice glass of Chardonnay from Penedes and nibbling on superb toasted ciabatta with a crostini of hummous and coriander, while I peruse the menu. All is well.

The place is buzzing, unsurprisingly, and the tables inside and outside on the covered terrace are full and nicely lit with candles and laid with simple table clothes. Music is jazzy and the clientele is down-to-earth, not showy.

Best of all, it runs like an Audi, with an efficient but friendly team… and it is no surprise to discover that Sally trained with the Hilton group, before honing her skills as food and beverage manager with a smaller hotel group in Yorkshire.

Adding husband Simon Taylor-Lane into the mix and you have the perfect compliment.

The former Savoy chef, who trained under Marco Pierre White at Criterion in London, also managed to run the Tiger Tiger group with no less than 67 restaurants. So he can deal with a/stress, and b/demanding food reviewers. 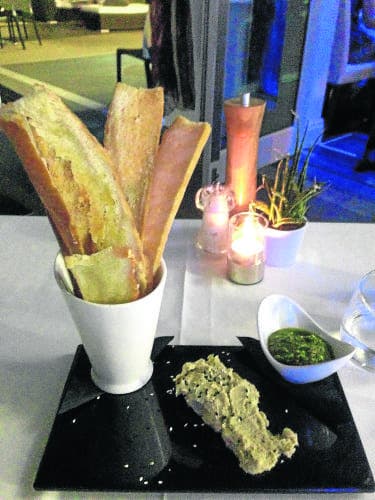 His menu is enticing enough and certainly good value. The two-course ‘table d’hote’ menu comes in at €13.95 and includes such delights as Cantonese-style spring rolls and classics like prawn cocktail. There is also always a soup.

I tried a variant on a Scotch egg, which was hit and miss, to be fair, but was made up for by a pancake with goats cheese, ham and asparagus.

The spring rolls were chewy, but full of bean shoots, carrots and peppers, and a lovely ginger flavour.

Best of all, though was the salmon Thai green curry, which had – as warned – a real kick to it. Extremely generous in size, it was very creamy and hardly left room for pudding.

But in the course of duty, unlike pussy reviewers like Giles Coren of the Times who famously never has a pudding, I took one for the team and went for the horrible sounding ‘Eton Mess cheesecake’.

And what a lovely surprise… it was a stunner, intricate, light and surprisingly fluffy with a crunchy meringue and perky red fruits. Yes, I’ll be back.

But the last word should really go to the very sensible Sally, a true businesswoman in the making.

While running the place now for four years and doing really well, she still has no illusions. “It is not about getting rich and getting a new Land Rover… we keep the kids at local school in order to give something back to the customers.”

That they certainly do: Two-course dinner, plus two extra starters, a crostini, a pudding, two glasses of wine, mint tea and water… all for just €48. A total steal. Go-como!