Holes in the floor and roof, smashed windows and a stolen Virgin, that was the fate of the Queen of Los Angeles, the home of famous British Hispanist Gerald Brenan. Until the Olive Press launched a campaign to save it. Now – seven years on – the home has been restored and a new chapter of Brenan’s life story can finally begin. By Imogen Calderwood

‘I HAVE spent nine days at Churriana. Already I feel rooted in this life and house again, almost as though, 13 years ago, I had never left it’, wrote Gerald Brenan in his book, The Face of Spain.

Brenan fled Churriana after the outbreak of Civil War but returned in 1949 to rediscover the much-loved house and garden where he wrote one of his best-known books, South from Granada.

When ‘Don Geraldo’ first set up his typewriter here, little was known about Andalucia, a region of backwater villages and mule tracks. Even now, Churriana is an unassuming town, overshadowed by the towering apartment blocks and hotels of neighbouring Torremolinos.

Walking the streets today, it’s hard to believe that the life of one of Spain’s greatest expat writers was played out here, in the house named Reina de Los Angeles (Queen of Los Angeles).

But it is only now, with the inauguration of his home as a museum and cultural centre dedicated to his life and work, that the story of Gerald Brenan in Andalucia comes full circle. 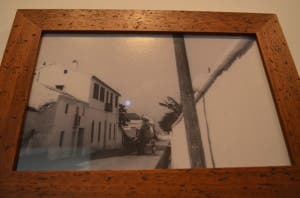 The 11th-hour restoration of his home, after years of neglect, might never have come about but for the efforts of the Olive Press and a small group of dedicated people bent on safeguarding it for future generations.

At the packed inauguration, it was touching to see the house reclaim its rightful place at the heart of the expat and Spanish community.

Silvia Grijalba, coordinator for Casa Gerald Brenan and journalist for El Mundo, said on the night: “When I started to mature the project, the Olive Press was one of the first newspapers I contacted, because of its central role in the English-speaking community.

“The restoration of this house owes the Olive Press so much. I am very grateful. People from Malaga will come here to see this centre and bring the life back to the town.”

Brenan, widely hailed as the greatest expat writer to have lived in Spain, was drawn by the quiet charisma of the town when he made his home at Number 56, Calle Torremolinos.

Although run-down, Brenan was captivated by the villa’s neo-classical style, with its soaring tower, romantic cobbled courtyard and fountain where pigeons splashed and cooed.

Bought for a mere £1,200 from a member of Malaga’s wealthy merchant class, Don Carlos Crooke Larios, it was the ideal love nest for Brenan and his new wife, American poet Gamel Woolsey, to begin their lives together. But it was 1934 and the storm clouds of war were gathering. 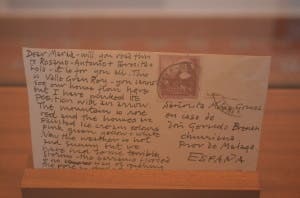 Two years later, as the couple were finishing its transformation into a comfortable home, Civil War broke out. It was especially bad news for the house’s previous owner. Carlos Larios was a falangist Franco-supporter, a prime target for the working-class syndicates who controlled the town. Desperate for a safe place to lie low, the compassionate Brenan took him in, although it put the lives of his household in jeopardy.

‘Don Carlos was in great danger and we were obliged, every time armed lorries entered the village, to conceal him in a secret cavity in the roof of the bathroom’, writes Brenan in The Face of Spain.

Eventually, Brenan organised a pass for Larios on a British destroyer to get him out of the country. But it was too late. The damage to the Brenans’ reputation was already done.

Hounded out the village for suspected right-wing sympathies, the author and his wife had no choice but to return to England.

It was here in 1943 that Brenan wrote his first Spanish masterpiece, The Spanish Labyrinth, a socio-political account of the run-up to the Civil War. It has been hailed as the most perceptive study of modern Spain ever published by a British writer.

External forces kept the couple away from Spain for more than a decade but in 1949 they were able to return to the dream home where they had begun their married life.

‘All around us lay the broad, flat, richly cultivated fields, spreading like a lake of green water to the edges of the mountains,’ wrote Brenan in The Face of Spain ‘A team of oxen was ploughing and, from far away, a boy’s voice carried in gusts of wind’.

But what he missed most during his enforced absence was his treasured garden. ‘We had forgotten what a garden we had’, he wrote of that homecoming. ‘The long path hedged with box bushes, the orange and lemon trees, the Japanese medlars… the grove of Burmese canes, the pecans and avocado pears and jacaranda – two acres and more enclosed by high white walls and irrigated from a raised tank in front of the central patio. We walked about in a sort of enchantment, amazed that this wonderful garden, with its wealth of flowers and handsome trees, should be ours’.

From within the garden’s walls he found inspiration to write some of his greatest works: The Face of Spain (1951) and South from Granada (1957).

Ernest Hemingway and Bertrand Russell spent their holidays here, along with friends from the artistic Bloomsbury Group, drawn by the glamorous dinner parties, endless drinks and late nights spent setting the world to rights.

“I met Gerald first as a child,” recalls his godson, the writer Carlos Pranger, one of those instrumental in the house’s renaissance. “I came to the house a lot while I was growing up and it was a truly amazing place.

“But what always struck me was the marvellous garden. It was full of tropical trees and water features, and was an idyllic place for a child to play.”

It makes it even more astonishing that this vital link to Andalucia’s literary past was so casually abandoned and left to disintegrate into dust.

Passing from owner to owner after Brenan left Churriana for Alhaurin el Grande at the beginning of the Seventies, vandalism and neglect took their toll on its noble façade. Seven years ago, the once-pristine white-washed walls had turned to grimy grey, the windows that once glowed with warm lamplight had been kicked in by vandals and plans by the new owners, the Town Hall, to turn it into yet another block of flats littered the cold tiled floors.

It was at this point, in September 2007, that The Olive Press first saw the sad ruin that the 200-year-old villa had become.

Shocked by the extent of the damage – including the theft of a wooden statue of the Virgin Mary from the side gate – this newspaper launched a campaign to save the house from its sorry fate.

Our outrage was infectious. National newspapers took up the call and finally the Town Hall realised that this historic national treasure was at risk of being lost forever.

Driven by the energetic force of Brenan’s stepson, Carlos, with help from Olive Press and El Mundo journalists, the gradual restoration was begun.

“The Olive Press was instrumental in getting things going. It was that campaign, and the impact it had on the English-speaking community in the area, that drove the restoration,” says Carlos.

“This house is a piece of history, and it is a real shame it was left in that state for so long. But now we can rebuild that spirit and work on returning it to its place at the centre of the community.”

Others who knew the Brenans have their own tales to tell, bringing the house and its history back to life.

“We would discuss politics and literature and the conversations would go on forever. We would arrive at 8pm and not even sit down for dinner until 11pm and it would go on and on and on, way into the early hours.” 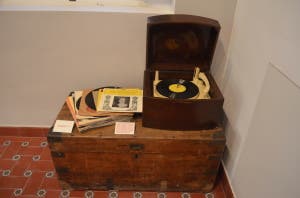 Those stories were reprised on the night of the inauguration party as the laughter of Britons, Americans and Spaniards spilled out of the newly white-washed ‘house-museum’ into the street.

Inside, where flamenco music and applause from upstairs echoed in the stairwell, Brenan’s most treasured possessions were on show. Donated by Carlos, there’s his record player and a selection of well-preserved vinyl discs; bookcases crammed full of the thousands of books he read; and, in pride of place, the old typewriter on which he composed some of his finest works.

Irish-born writer Ian Gibson was one of the speakers at the inauguration. Clearly touched by the admiration being expressed for a man who inspired his own career, he said: “I dedicated one of my books to Brenan. The dedication read, ‘without him, this book might never have been’.

“He inspired me to write as I do, and some of my work has picked up where he left off. He was always a great conversationalist and letter writer, I am honoured he considered me a follower in his footsteps.”

Looking at the house today, with the Virgin Mary’s newly-restored statue back where she belongs, Carlos is nostalgic for the house of his childhood.

“It has taken a very long time to get to where we are today, and a great deal of hard work,” he says.

“But we mustn’t let it stop here, and let the house fade back into oblivion. We have a great opportunity to restore the heart of the expat community, and we can’t let it stop now.”

But this isn’t just a story about one man and his house. It is about all adventurers and dreamers who leave their homeland for distant shores and make a difference there. It is an inspirational story for expats today, as well as a treasured piece of British and American cultural heritage on the Costa del Sol. It is a story that must never be forgotten. 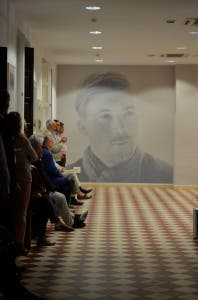 Gerald Brenan’s life in Churriana to be recreated through anecdotes