THE leader of Gibraltar, the British consul and the Mayor of Mijas all sent warm messages to the Olive Press on its 200th issue.

Since the very first edition hit the streets eight years and 200 issues ago, the paper has evolved into Spain’s number-one English-language newspaper.

The first issue exposed the travesty of greedy developers cutting off footpaths as they began carving a golf course and the obligatory 1,000-plus houses on Unesco-protected land near Ronda.

In each issue that has followed, we have fought and campaigned to make Andalucia a greener, safer and all round better place. 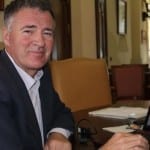 “I would like to congratulate the Olive Press on its 200th issue for its hard work on the Costa del Sol. For a town hall like Mijas, where there are thousands of English-speaking residents, it is vital that there exists a publication like yours that can report well, with passion and professionalism… in particular in reference to the environment.” 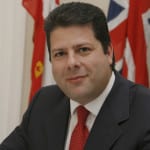 “It is with great pleasure that I add my voice and that of the people of Gibraltar on your 200th edition. I have no doubt that your role in keeping expats and English speaking people in Spain well informed will continue in the coming years. Many thanks for your fair reporting of Gibraltar matters.” 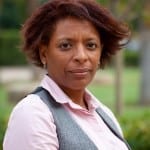 “Congratulations on reaching your 200th issue! Over the past eight years, the Olive Press has played an important role in keeping British expatriates in Andalucia informed on everything from health matters to property issues. Your commitment to reaching even the farthest flung areas of Andalucia is admirable. I wish the Olive Press every success in the future.”

“The Olive Press has long been essential in Andalucia for its critical and honest point of view on local and national stories. Furthermore, the articles about culture are a must. Congratulations on your brave journey.”

“Congratulations for reaching your 200th edition, a real achievement considering how difficult the last few years have been for advertisers. We can relate to the labour of love, laughter and tears that this momentous effort represents. Over the years, the Olive Press has grown in stature, developing a solid reputation for investigative journalism while building a nice client base along the way. It has shown time and again that it is fully prepared to expose wrongdoings and unsavoury individuals; delivering a very valuable service to the community it serves. As fellow publishers, we wish them continued success for the long-term future!”

“Well done on your double century and please continue to champion the green agenda, and continue to make a stand against the mad developments that threaten Andalucia’s environment as well as promote the best that this magical land has to offer…food, literature and history.”

“The Olive Press has become a key source of information for what is going on in Spain – even for the local Spanish. It is completely independent, critical and, above all, honest, which is extremely rare. The paper has avoided the compromised world of Spanish media, which is too close and manipulated by the powers that be. Keep up the good work.”

“As an animal rights campaigner, big thanks must go to you for helping to bring my many campaigns to your readers’ attention. Without your support, my work would have been made far more difficult with my campaigns always having far more impact when reported upon by the Olive Press. You truly deserve all the success you get.”

“I’ve lived on the Costa Del Sol since 1978 and the Olive Press is the most informative and refreshing newspaper I have come across. It is always a good read and, what’s more, it is always been productive to my business when I advertise. Keep up the good work for hundreds, nay thousands of editions to come.”

“I have been living on the coast for 12 years and when the Olive Press first appeared on the scene it was a true breath of fresh air. As well as the printed edition which is excellent, I check in several times a day to the website. I find it both informative and also allows readers to comment which often leads to some interesting debates.”

“I am delighted to have watched the Olive Press go from strength to strength over the last eight years. As well as the informative and reliable reporting, we enjoy the admirable, regular campaigning to expose the less savoury aspects of local life, as well as its stance on environmental matters. It is no small achievement that more and more residents on the Costa del Sol call the Olive Press their local newspaper of choice. Furthermore it brings the right kind of clients for our inland hotel and restaurant and as the geographical spread of the paper has expanded so has its effectiveness for advertising.”

“I have been reading the Olive Press online since moving to Salamanca, and despite the target readership residing in southern Spain, I find it to be entertaining and relevant to expatriates all over the country.”

“Congratulations on finding success in an increasingly competitive publishing world. Since writing for the paper three years ago I have found some excellent clients, while many more people I meet tell me that the Olive Press is their preferred local newspaper. Keep up the good work.”

“The Olive Press is always a great read and we always look forward to the day it arrives. On top of that we have always found the paper effective and it has just the right balance of advertising and news and we always get great results. Keep up the good work, you are a very valuable asset to the residents of southern Spain”

“The Olive Press is a free newspaper which rightly prides itself on its editorial content. Pages dedicated to advertising are therefore regulated and controlled which in turn renders a niche service for promoting ones business.”

“We have been using the Olive Press as our main advertising medium for over 18 months and are delighted with the response we get through the newspaper and have absolutely no plans to change. The success in reaching our target audience has been outstanding!”

“We at HouseSitMatch.com have very much enjoyed working with the Olive Press team. They have helped to make our entry into the market in Spain an enjoyable and rewarding experience. In particular they helped us find some valuable clients, from both the human and animal kingdoms!”

“We’ve been advertising with the Olive Press for ages now and it has been great for us. We have always received good service, both for Union Jack Removals and more recently with Deja Vu. We wouldn’t dream of advertising with anyone else.”

“Helle Hollis has been advertising with the Olive Press for years and we are very happy for the coverage and feedback we are getting.”

Bedding down for winter