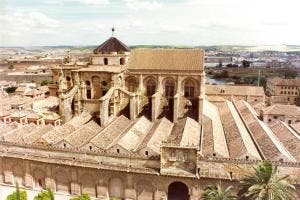 SPAIN’S Catholic Church and Andalucia’s Tourist Board are locked in a bitter dispute over the renaming of Cordoba’s most iconic building.

The row centres over the removal of the word ‘mosque’ from the title of the city’s famous Mosque-Cathedral, even though the cathedral is actually built inside a mosque.

The region’s tourism department has filed a complaint with Church authorities over what it believes are moves to ‘blot out the building’s Islamic past’.

Tourism chief Rafael Rodriguez said that the Church’s decision of simply calling it ‘The Cordoba Cathedral’ on its website and pamphlets could prove detrimental to the 1 million annual tourists who visit the Mezquita, as it is also known.

He added that the Church was ‘proud of the monument’s past’ and doesn’t try to conceal it.

The Mosque itself was built in the eighth century and was transformed into a cathedral in the 13th century after King Ferdinand III captured the city from the Moors.

The monument – still called the Mosque-Cathedral by Cordoba Town Hall – was crowned a UNESCO World Heritage Site in 1984.