USUALLY a time to celebrate, this New Year marks the end of an era for many small businesses and independent retailers across Spain.

As of January 1 a change in rental law will see rent controls scrapped to allow landlords to raise rents to whatever they want.

More than 200,000 family-owned stores, bars and restaurants are to be affected by the law change and 55,000 are predicted to shut within the first three months of 2015.

The lifting of the 20-year-old rental cap will also see around 120,000 jobs wiped out from a country which already has a 24% unemployment rate.

Luis de Guindos, the Economy Minister, said the law passed in 1995 ‘gave businesses two decades to get ready for the scrapping of rent controls’. 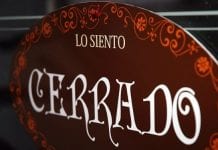