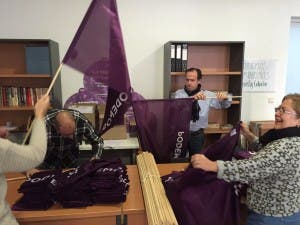 VOLUNTEERS have turned out in their droves to help with preparations for Podemos’ ‘March for Change’ rally in Madrid tomorrow.

With chants of ‘Si se puede’ (yes we can) echoing around Podemos HQ, the Olive Press spoke to a number of excited volunteers.

Puero Rican volunteer Geraldo Portela told the Olive Press that the is optimism for the year’s regional and general elections grows every day.

“We are ready to win, even though it’s a new party a lot of people are ready to do their job,” the 33-year-old said from inside Podemos HQ.

“The other parties are the ones who aren’t ready to be in government.

“They are just there to take the people’s and do nothing good.”

The party is advertising tomorrow’s rally as a march organised ‘by and for the people, built by all’ that will show that ‘there’s a new majority which knows that the time to act is now’.