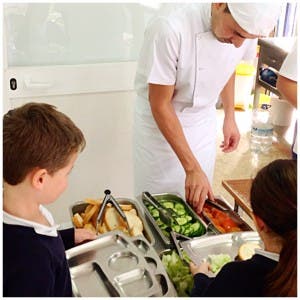 SCHOOL dinners ain’t what they used to be – and that’s a good thing.

With dietary concerns growing year on year, the days of turkey twizzlers and spotted dick look to be a thing of the past on Europe’s school lunch menus.

The UK has just introduced a new set of regulations to improve the quality of school lunches – giving Jamie Oliver good cause to bang a dinner gong. The celebrity chef won the MBE in 2003, following his campaign to make school dinners more nutritional.

In Spain, the food safety agency (AESA) has been on the case and developing nutritional policies for over a decade.

Spain was given a metaphorical kick up the culo in 2004, after a report showed that a whopping 45% of 12-16 year-olds dumped their school lunch because of its taste or poor preparation.

It led to the set up of the Spanish Strategy for Nutrition, Physical Activity and Prevention of Obesity (NAOS) in 2005 to create a ‘positive image’ for school dinners.

And it appears to have worked.

Today, a typical school lunch consists of a salad with fresh bread with, either chicken or fish with rice and vegetables for mains and a piece of fruit or yoghurt to finish.

Many primary schools also monitor pupils’ eating habits and send a simple report back to parents, advising them on what their child did or didn’t eat.

They know this because dinner ladies are encouraged to sit at the table to supervise the children, rather than being the scary apron-clad kitchen-bound staff of old.

But while the uptake of school dinners has risen in both Spain (to 65% of children) and the UK (68% of children), they still have a long way to go to reach the dizzy heights of Scandinavian countries such as Sweden, where over 95% of students tuck in every day.

Food for thought: Is chorizo in paella really such a bad thing?