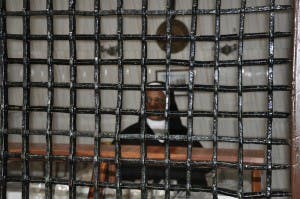 WHATEVER I expected to find in Medina Sidonia, it wasn’t the Spanish Inquisition; or the ruins of a subterranean Roman town; or the greatest sister act in home baking since Two Fat Ladies.

Like most tourists, I’d gone to this hilltop fortress pueblo (just off the Los Barrios-to-Jerez road) to pay homage to ‘the Duke’. Not John Wayne, if you’re wondering, but the fabulously-named Don Alonso Perez de Guzman el Bueno y de Zuñiga-Sotomayor, seventh Duke of Medina Sidonia, who died four centuries ago this July.

He was the Spanish Armada Commander who suffered from seasickness, if you remember your O-level history. Medina Sidonia doesn’t make a big deal of the man who ultimately lost one of Europe’s greatest sea battles. Understandably, it’s not something the authorities like to boast about.

They also keep shtum about a more recent ducal descendent, the outrageous 21st ‘Red Duchess’, so-called for her bolshie behaviour. She once wrote a book claiming that the Phoenicians, NOT Columbus, discovered the New World! And that wasn’t her last two-fingered salute to Spain and her relatives before she became another skeleton in her family closet.

In a bizarre deathbed ceremony in 2008, she married her secretary and lesbian lover of many years and left the family silver all to her. Her son, the current Duke of Medina Sidonia, is Professor of History at the University of Castilla-La Mancha and, probably, bitter.

Medina Sidonia has other secrets.

· Hidden in the basement of one of the old houses is an original Roman street, complete with pavements, kerbstones, gutters and Roman graffiti

Medina Sidonia is renowned for its Arabic confectionary, in particular its signature alfajores which have a D.O.-type quality award. Oozing with honey, crunchy with almonds, hazelnuts and sesame seeds, aromatic with exotic spices, all the local bakeries sell them but it’s more fun to buy them from the nuns.

The convent shop is just off Plaza España – a photo-opportunity of a square with a Renaissance town hall and two symmetrical rows of bay trees forming an arboreal guard of honour, their leaves sculpted into helmet-shaped bobs.

Through the convent doorway, past a sign marked Confiteria, you come to a room divided in two by a heavy metal grille, and a sign saying: ‘To Attention. Please press the bell’.

A nun in a black and white wimple appears behind this medieval portcullis and I wonder what we’ll do if she’s taken a vow of silence. Fortunately, not. The transaction is accomplished in brief reverential whispers.

Whether for reasons of health and safety, or to prevent unnecessary contact with the outside world, you put your money on a little revolving turntable and the sweets appear in its place. Like a miracle.
It was a bit like being in a confessional box and sweets are one of my vices but, happily, they didn’t cost me four Hail Marys or even two Our Fathers – just a bargain €10.

And they were heavenly, of course!