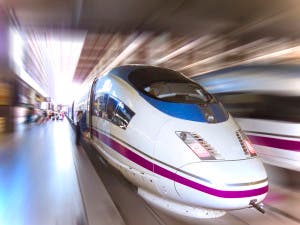 A PROBE has been launched to investigate a proposed high-speed train test centre near Malaga.

The European Commission has launched an in-depth investigation over concerns about its eligibility for EU funding.

The investigation will determine whether plans for a 55km high-speed rail track in Antequera are within EU aid rules.

In 2013, the Spanish government announced plans to apply to EU Regional Development Fund to cover most of the centre’s €358.6 million price tag.

“At this stage, the Commission has doubts that the project pursues a genuine objective of common interest,” an EC spokesman said.

The test line in Antequera will include tunnels and a viaduct to simulate the structures found throughout Spain’s high-speed rail network.

A preliminary investigation revealed public opposition to the test track greatly outweighed demand from the industry.

Announcing the start of the investigation, the EC said it had not received a sufficient response from Spanish authorities to suggest that the facility would be made fully available to all EU users.

There were also concerns that public sector funding may not be enough to attract additional investors.

Alex Trelinski - 19 May, 2022 @ 17:09
TWO Gandia health centre receptionists were attacked by a man who walked in and started to insult them. The man appeared at the Beniopa centre...