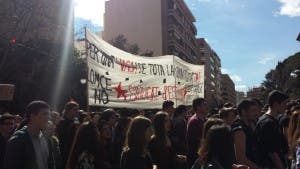 SPAIN’S students have been hitting the streets to protest against university degree reforms.

The government has approved the new ‘three plus two’ law which will reduce undergraduate degrees from four to six years to just three, in line with much of the rest of Europe including the UK.

The law will also see masters degrees extended from one year to two.

Education minister Jose Ignacio claims reducing undergraduate degrees will cut costs for families by a total of €150 million a year.

“The four year undergraduate degree and one-year master’s system in Spain is very rare,” he said.

“Moving the degree programme inline with our European neighbours will save families all over the country a great deal of money.”

But a large number of academics disagree with the reform and have already staged public protests.

They believe a two-year master’s degree will increase costs for them, while squashing down undergraduate degrees will lead to cramming.

By changing the system in Spain, UK graduates may find it easier to get their qualifications recognised abroad.

Until now a British degree was shorter than a Spanish one and was rarely given the full credit by the Spanish education authorities.

In contrast, a master’s in Spain has always been considered weaker in other northern European countries, because it involves much less study time and rarely includes a dissertation.

Spain’s education sector dips a toe into the 21st century, but will it take the plunge?