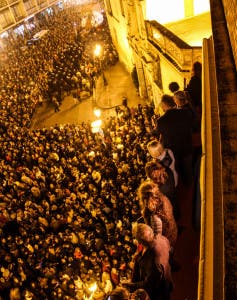 MY friends laughed when I told them I was going to see Sevilla in Holy Week. Because of course, so was everyone else. There’s not even standing room in the streets on Good Friday when the city plays host to over one million spectators.

Sevilla is home to 58 hermandads (brotherhoods) and each of them fields a procession of float-carrying penitents, followed by their family and friends … abuelos and tíos, siblings and babes in arms walking solemnly behind, generating one giant traffic jam.

It’s almost impossible to describe Sevilla’s incredible Semana Santa processions without making them sound like a sinister Disneyland parade. But when I joined Toma Tours’ Semana Santa trip to Sevilla on Holy Wednesday with MD Manni Coe, I promised to try, so I will avoid references to the Klu Klux Klan (sorry, that’s just my inner guiri coming out).

As a virgin spectator in a city that’s filled with Virgin Mary’s at this time of year, it’s safe to say I have never witnessed anything quite like it.

We arrived as Sevilla was sleeping, the calm before the storm.

Manni’s excellent introduction showed how passionate he was about Andalucia’s capital, where he lived for five years before deciding he couldn’t put his body through another tortuous 50C summer. As – like me – he grew up in Reading, that’s more than understandable…

We parked on the outskirts, as all roads through the centre are closed to traffic during Holy Week; a whole thriving city shut down. Toma Tours had rented a balcony – the only way to watch the spectacle if you’re in the know.  The largest in the city, we were told, owned by a welcoming American-turned-Sevillian named Brad.

It was certainly massive, 30 metres in length with views over the church and plaza of Cristo de Burgos from every angle.

Before the night-time frenzy, I took the opportunity to explore Sevilla in the sunlight and soon became adept at spotting a gap between the nazarenos and slipping through.

Nazarenos are the figures in pointed hoods and robes in the colour code of their hermandad who walk behind the floats (pasos). They number hundreds, sometimes making processions a mile long. Usually led by a brother carrying a wooden cross, a police escort helps them carve a way through the crowds.

The logistics of organising half a million people who come for the build-up to Good Friday beggars belief and soon I’m walking in circles, far from the conviviality of our candlelit balcony and just as far from  the cathedral I’d hoped to see.

The plaza, when I relocated it, was rammed and humming with the expectant masses, the fervour heightened as many of these meticulously-planned processions were rained off the year before. Bad weather at Semana Santa occasions real mourning among the more passionate Spanish. 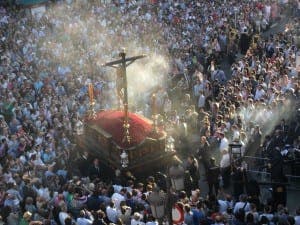 They’re also not averse to mixing vino with their veneration and we enjoyed a copa, along with wafer-thin slices of jamon Iberico, from our balcony – surely the best seats in the house.

The priceless floats are beautifully hand-carved and this is the only time they leave their churches. Although ‘float’ they do not. They can weigh several tonnes and the technique of swaying them to emulate dancing is very tricky to master.

Christ came first, followed by hooded nazarenos dressed in black and shouldering crucifixes, all accomplished in reverential silence and under the gaze of a thousand expectant eyes. The Virgin followed, bedecked with candles, flowers and silver, then the band, pumping the sound of drums and brass around the square.

I  recognised the music. I’d heard it coming from the sports hall in Estepona on many evenings over the previous month. Obviously rehearsals! Similar processions are held across Spain, from tiny pueblos to major cities, but they can’t hold a candle to Sevilla’s.

As the sun dipped behind the spires, the rapturous music and the scent of burning incense and candlewax created an intoxicating, ethereal cocktail.

As one Virgin slowly disappearing around a tight corner, another appeared with its own procession of nazarenos, this time clad in brown.

Among the hoods were immaculately-dressed children hurling sweets into the crowd from buckets, excited to be the centre of attention.

Other youngsters holding balls of wax hovered tentatively on the edge, begging the nazarenos to pour candle wax onto them. Manni explained that this is a competition between the local kids to end the night with the biggest ball. We spotted one lad cheating – pouring wax over a football – but refrained from reporting him to the wax ball police.

It was soon time for our own Virgin’s return, streetlights were turned off and candles alone lit the majestic scene. As the procession stopped one last time, a saetaro on our balcony began singing to the crowds and all eyes were turned upon us. The saeta, a mournful gypsy prayer that has become a song through flamenco, is notoriously difficult to sing and only heard in Holy Week.

It was a magical moment. Everything that had gone before lead up to this still moment in time: the statues, the flickering candles and the lines of nazarenos caught in freeze frame before wending their weary way back into the church, watched by the entranced worshippers.

I understood why there were TV cameras in every square, beaming this breath-taking footage to screens around Spain. But it doesn’t come close to being there, living it, breathing it, being a part of it.

Everyone should go once to see the wonder of Semana Santa in Sevilla.

Alex Trelinski - 7 Feb, 2023 @ 14:35
SPAIN'S Council of Ministers has approved the end of mandatory mask wearing on public transport which is expected to be lifted on Wednesday. Spain was...