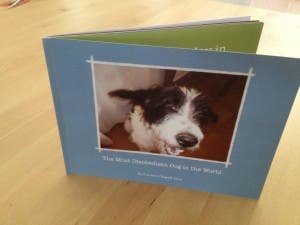 GIVEN his age, I am quite proud of he-who-must-be-obeyed.

My master does still take me out every day and often to great, really smelly, places.

I must point out that the first sentence is misleading since as it is hugely ironic.  I am not in the habit of obeying anyone unless it suits me.  He calls me a bad dog because I do just as I please. Well if you could get away with it, wouldn’t you?

I come to his side when he calls, only if there is nothing else I want to be doing. It makes me laugh because when I ‘do as I’m told’ I get praised.  Imagine getting praised for doing whatever you want. He doesn’t realise I ‘do as I’m told’  when his command  happens to be what I wanted to do anyway. It’s called pure coincidence.

When I am disobedient he doesn’t usually bother to reproach me.  He really has no idea of how to train a dog. It’s not my fault I am his only friend and he’s scared that if he upsets me I won’t be his chum either.

He-who-must-be-obeyed has two daughters (for any dog readers, these are basically human puppies).  The elder one, called Carmy, read a book when she was a little pup called ‘The Most Obedient Dog in the World’.

She thought it would be amusing to compile a book about me with the title altered from ‘Obedient’ to ‘Disobedient’.  He keeps it in pride of place on his desk.

Sad. Very sad. It’s amazing that I am as well-adjusted as I am.

Must dash – a bag of pork bones has just appeared from the hotel kitchens. Writing a column is a priority. Dealing with warm bones rates ever so slightly higher.

Head found in new age community near Granada is not a missing Dutch woman, ‘but a man in his 40s’