MIRIAM Gonzalez, Deputy Prime  Minister Nick Clegg’s wife, has said she is at a disadvantage compared to her political contemporaries as she only has one kitchen. 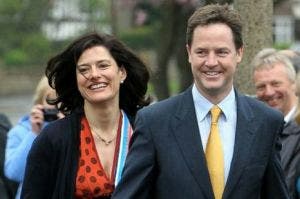 After last week’s international press descended on Ed Miliband and his wife Justine when their modest pantry was presented as a family kitchen, Gonzalez showed she had a sense of humour.

The Spaniard, born in Valladolid, was being interviewed for the campaign Inspiring Women to encourage young girls to achieve.

She said: “I feel at a disadvantage talking about the kitchens because I only have one kitchen!

“And I don’t even have a sofa in the kitchen.”

She admitted that she is far better at cooking than the Liberal Democrat party leader and said that what initially drew her to him was his looks.