A SPANISH couple suffered a racially aggravated assault in York, famous for being one of  Britain’s most picturesque, tourist-friendly cities. 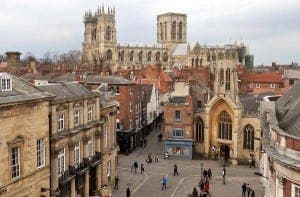 A manhunt ensues for a group of men who repeatedly punched and kicked a 24-year-old Spanish man and held his 29-year-old girlfriend down during the attack.

The ten-minute assault took place in the centre of the city and only stopped when a passing taxi driver stepped in.

The male victim suffered a broken jaw, extensive bruising and chipped teeth and was treated at York Hospital.

The group of five men were described as white, in their twenties with short or shaven hair, and the police are eager to trace them.