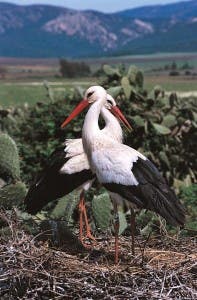 IF you’ve been in the countryside of late, you’ll have noticed that spring has sprung.

There’s fecundity and fornication in the air and everywhere you look (and I’m not a voyeur) Mother Nature is getting it on, the hussy.

It’s all happening down here in Los Barrios. The birds and the bees, the storks (making their own babies), the tortoises in the river (strange but true); humans too, judging by the number of new baby clothes shops sprouting in Los Barrios. They’re all doing it!

Jealous? Moi?  (I hope Dave’s not reading this.)

Our patio has taken on the appearance of a pornographic film set for flora and fauna, and the air is abuzz with copulating carpenter bees. When they’re not pollinating the season’s first blue wisteria blooms (unbelievable, even the plants are at it!) they’re having it away on the wing.

I don’t know whether you’ve seen a carpenter bee (biology byte: so-called because they nest in wood) but they’re black, shiny and bloody gi-normous (about the size of your thumb). When there are two of them dive-bombing you while clasped together in coitus, that’s scary.

All along my walking route, there are birds bonking. Los Barrios boasts one of the largest nesting stork colonies in Europe. I’m a can’t-tell-stork-from-butter girl myself but I know they don’t have two backs and four wings.

Every pylon and telegraph pole is topped with a breeding pair, joined as the season progresses by two or three smaller, fluffy heads – clear evidence of what they’ve been up to. The local council even provides the beds! They make special nesting ramps above the electric cables to prevent the storks from getting roasted  … in one way…

There’s one pair making whoopee atop our church tower, which makes you wonder how they manage it. Even with wings, it must take some doing. They’re local celebrities, an avian civil partnership who return to the same nest, year on year (sweet!).  We’ve got kestrels going bats in our belfry, too, though it’s coitus interruptus when the bells ring.

There’s only one creature in our village who doesn’t conform to these vernal cavortings. Margarita:  a moggie for all seasons. Spring, summer, autumn, winter – she’s hot to trot, the strumpet! She’s had half a dozen litters already and she’s barely out of kitten-hood herself.

She’s owned, in a casual way, by the lady who runs our neighbouring sweetshop (the one run from a garage). She sleeps rough but is allowed out back to have her brood.  All have been found homes.

The last batch was jet black and I don’t have to look beyond our own rooftop to know which big, butch, black, ballsy, ear-bitten alley cat is the culprit. He’s out there every day now, prowling, yowling and spraying.

Yes, spring has sprung in Los Barrios. It’s time to give them all – plants, carpenter bees and alley cats – a good cooling off with the hosepipe!

Astronomical night sky events to be seen this Spring from Spain

Spain’s Malaga will start the week with a noticeable rise in temperatures, above 20ºC