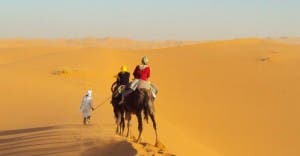 CAMELS and date palms may be on the horizon for Spain as global warming edges the country’s climate closer to Morocco’s.

With average temperatures expected to rise by as much as five degrees by 2050, Spain’s universally appreciated crops could be in serious jeopardy.

The forecast is bleak: not only were the 10 years from 2002 to 2011 Europe’s hottest ever decade; the rate of warming here is calculated to be 0.2 degrees above the world average.

The continent is lagging behind other nations in the fight against climate change, with temperature rises predicted to bring longer summers, warmer winters and the desertification of land.

“The problem is that the Spanish government is currently conducting a series of measures that are completely contrary to the fight against climate change,” said Gomez Cantero.