PONT-TAILED Pablo Iglesias shunned protocol to give King Felipe the complete ‘Game of Thrones’ series when they met for the first time today. 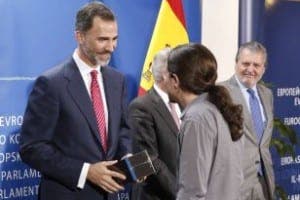 The king reacted graciously at the Brussels MEP meet-up in Brussels, grinning and admitting he had not yet seen the series.

Iglesias reportedly gifted the violent series to him so he might ‘better understand the political crisis in Spain’.

We predicted a warm embrace would be unlikely when they met for the first time, given Iglesias’ desire to abolish the monarchy.

The left wing leader currently topping the polls also plans to call a referendum on the monarchy’s future should he come to power, so tensions were expected to be running high.

Furthermore, Iglesias had requested a meeting with King Felipe in February but had not received a reply.

It was the king’s first visit as monarch to the European Parliament to greet the 54 Spanish MEPs, five of whom are Podemos politicians.

From journalist to Queen of Spain: Letizia celebrates her 50th birthday

KING FELIPE: You will remain as a ‘solid and valuable legacy for future generations’

Staff Reporter - 30 Sep, 2022 @ 16:46
AFTER stumbling through the second half of September, the pound euro (GBP/EUR) exchange rate then collapsed at the end of the month following the...