IF you’ve been to Estepona of late, you’ll know that half the town’s gone quite potty. Potty for plants, that is.

There are flower pots all colours of the rainbow decorating every wall of every street, along with hanging baskets, verdant verges and floral borders perfuming the air. Which makes it the smelliest town on the Costa –  in a good way!

But that was last year’s news. This year, Estepona’s secret gardeners have really come out of the closet with the opening of the town’s new pin-up tourist attraction: The Orchid House, an awesome secret garden growing under glass.

A trio of waterfalls nurture over 8,000 species of orchids under three giant glass domes.

With water cascading from the ceiling into a pool below, and – somewhat bizarrely – the soundtrack to Gladiator playing in the background, it’s not so much an attraction as a ‘horticultural happening’, underscoring the new green direction Estepona is taking. 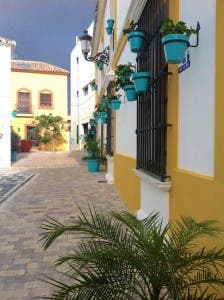 The Orchid House reflects the town’s mission to break away from the hackneyed ‘sun, sea and sangria’ mantra some Costas still cling to. And with more than 100,000 visitors expected to generate €2 million a year, it’s far more than a futuristic greenhouse.

On opening night, a foray of fireworks were sent high into the sky for all of Estepona to see, a symbolic

finale to the town’s total transformation.

Welcome to the not-so-secret garden of the Costa del Sol.

It only takes a quick up-and-down through the steep, whitewashed streets of the Old Town to get a good impression of its charms but a drawn-out stroll is much more pleasurable.

Cute tapas bars sprout from every corner of every flower pot-decked street. Water-features, murals and a multitude of bijou, flower-fringed plazas spring up in the most unexpected places, inviting discovery.

A major rejuvenation over the last two years has seen the pedestrianisation of Estepona’s central thoroughfare, giving it the feel of a traditional white Spanish pueblo.

The Town Hall has also attached thousands of freshly-painted plant pots to the sides of the houses, allowing the locals to choose the colour for their street.

The traditional image of boozed-up Brits living it large on the Costa del Sol could not be further from reality in Estepona’s picture postcard Old Quarter.

And it is for exactly this reason that expat travel writer Barcley Spicer-Jenkins, 21, loves living here, by the sea.

“Unlike many places on the Costa, Estepona more than caters for the demands set out by large quantities of tourists while retaining its own character and individuality,” he explains.

“High rise holiday lets don’t scar the landscape, nor are there tacky shops, bars or pubs that give a feel of ‘England in the sun’.

“The Old Town is so well-maintained that you experience beauty at every turn and the well-managed flora not only brings an abundance of colour to the area but it also makes the back streets smell glorious.”

The idea of living the Costa del Sol life, but in a typically Spanish way, is also what attracted Irish expat Seamus Hayes and his wife Alena to the town last May.

“We first came across Estepona when driving through one evening,” Seamus explains. “We felt that it had a real buzz and soon visited every weekend.

“The Spanish feel to the town puts it head and shoulders above other resorts along the coast.

“Living the dream is all that can be said about our time here.”

If Spanish tapas bars and late night strolls around identical streets gets a bit too repetitive, for a complete contrast there is always Estepona Port.

A 20-minute walk up the wide, palm tree-studded promenade takes you into a world that moves to an up-tempo beat  more typical of a classic Costa del Sol beach resort.

A wholly different beast to the Old Town, the port is the setting for more tales than you’ll find in a Hans Christian Anderson tome – although they’re not salty sea dog tales. They stem from the port’s frenetic nightlife.

From salsa bars to Irish bars and from Thai to Chinese to Indian restaurants, the port is a breath of bracing sea air for locals and tourists by day and a hip hangout for the younger set after dark.

It may not have the same authentically-Spanish charm as the Old Town, but it makes up for it with its buzzy vibe.

On a Friday and Saturday night the bars are so full that revellers spill out on to the streets in their own version of the Spanish botellon.

On Sundays, the weekly flea market draws in hundreds of visitors from along the coast.

And the port is not the only place to party in Estepona, which has not one feria but two.

The first one in May celebrates San Isidro, the patron saint and there’s an even bigger one in July, lasting a week and coaxing the whole town out to drink, socialise and party in the sun.

The four-day July festival, based next to the spanking new football stadium, includes a livestock fair, a bullfight, concerts and fun-filled family events.

The locals in the centre don traditional costumes and serve up food and drinks from their houses – the highlight!

And the partying is not limited to the ferias. Christmas, New Year and Semana Santa parades, and civic happenings throughout the year, are all red letter days in any Esteponian’s diary.

If there’s a reason to celebrate, Estepona’s up for it big time, usually closing off Calle Terraza – the main road through the Old Town – in the name of celebration, happily trapping everyone inside so they’re forced to kick back and enjoy!

While the Old Town preens its new green appeal and the port struts its multicultural stuff, Estepona’s historic gems are equally worthy of note although they don’t make such a song and dance about it.

From the scattering of watchtowers built to ward off the Moorish invaders to the Arab-built clock tower and the 16th century castle ruins, Estepona is a lady with a past.

Destroyed by the conquering Christians in the 15th century and rebuilt by Queen Isabella and King Ferdinand almost a century later, King Philip V granted the town a charter for 600 families in 1729.

Compare that to the 60,000-plus residents today, a figure that more-than triples in summer!

The locals are also proud of their 18th century Franciscan monastery, now the Church of our Lady of Redemption. The church tower is a spectacular vantage point. Don’t miss the sunset, with the Sierra Bermeja mountain range silhouetted in the background!

If Estepona is impressive at ground level, the views from above are even more enlightening. The white-washed rooftops are stacked higgedly-piggedly-style, with roof terraces and balconies jutting off at odd angles, a sure sign of a town that has gone its own haphazard way, over the centuries, rather than conforming to any straight-laced rules.

Estepona is a town that likes to do its own thing. Currently, that thing is plants. Potty it may be but that’s all part of the charm.