WHAT’S the perfect way to give your rugby team the perfect incentive for a final push at the end of the season? 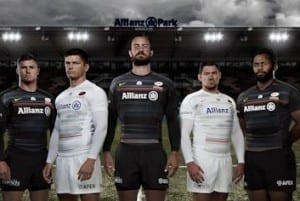 On a four-night bender, they were seen most nights in the heady back streets of Puerto Banus drinking, singing and strutting their stuff.

The famous Vunipola brothers in particular threw some show-stopping moves among the revellers and hen and stag nights at a packed Linekers bar.

Wearing floppy fisherman’s hats and sunglasses, they jumped up and down to a series of celebrated rap tunes and really looked the part.

Beaux, boss of the Linekers Group told the Olive Press: “They are such great guys.

“They know how to party but they are also really well behaved.”

He continued: “On Wednesday night they were in fancy dress as super heroes.

“And it seems to be a themed night most nights. They are having a ball.”

The team from north London arrived early on Wednesday morning via Easyjet and took the first few rows of the plane.

One fellow passenger told the Olive Press: “They were all wearing shorts and t-shirts, clearly ready for their holiday.

“There was lots of banter but they are really great boys.”

While in Marbella they also ate at La Sala restaurant as well as enjoying themselves at La Sala Beach club that has just opened for the summer.

The team currently sits third in the league tables of the Aviva Premiership, after Northampton Saints and Bath Rubgy with two matches to go.