I DON’T do pilgrimages, as a rule; they smack of incense, austerity and blisters. But a personal invitation from the Mayor brooks no refusal, even when it interferes with my Saturday morning lie-in. 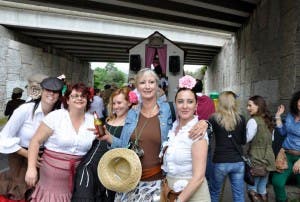 And although Los Barrios Romeria starts off with a church mass on bended knee, it turns into a mass bender with a knees-up thrown in!

Now in its 52nd year, it’s not as famous as the Camino de Santiago or El Rocio. But it’s a Fiesta of Touristic Interest, and foreigners are welcome to join in this pastoral homage to the town patron saint, Isidro Labrador (that’s the labourer, not the dog).

My spirits rose as I was presented with a shiny tin mug and a stick topped with a wheat stalk to help me on my ‘merry’ way (a nod to San Isidro, whose remit includes agriculture and fertility).

As we scrambled aboard our tractor-drawn chariot, 318 horses and riders champing at the bit in the side streets slipped smoothly into their slots in line like equine formation dancers.

Guardia Civil officers, also mounted on horseback, were briefed to get tough on cavalier behaviour but no one was arrested … though more than a few wouldn’t have minded being handcuffed by the pony-tailed blonde!

It’s ‘Shank’s pony’ for most, as 12,000 pilgrims won’t go into 97 wagons, no matter how you do the math. But with carretas crammed with boom boxes, cool boxes and a ‘rebujito cocktail’ of Tio Pepe + Sprite on tap, no one in their right mind was ‘going on the wagon’.

Our pilgrimage progressed tipsily through a Constable landscape of green fields and spring flowers to La Montera del Torero camping grounds (named after the rock that looks like a bullfighter’s hat).

With the old road to Jerez closed to conventional traffic, it could have been the Middle Ages, especially as the absence of wayside loos meant frequent furtive forays into Europe’s largest cork forest. But if you’ve read Chaucer’s Canterbury Tales, you’ll know that pilgrims have no qualms about mooning in public.

Not so, señoritas in sausage-skin-tight feria dresses who were thanking heaven for ‘hoop-a-loos’, as I christened the hooped fabric tents that spared the blushes of ladies caught short in the bushes. The Mayor won the thoughtful vote with his handy freshen-up kit in Partido Andalucista colours, now forever associated with wet wipes!

Being Number 18 in the wagon train, we overshot the lunch stop at Venta el Frenazo by 50 carretas, enjoying our merry merienda at trestle tables under a viaduct! After enough grub to make The Feeding of the 5,000 look like the teddy bears’ picnic, the ‘whikee’ came out, ensuring high spirits for the rest of the journey.

I didn’t make the evening barbecue, the after-party or mass on Sunday but I no longer wonder why so many Los Barrios babies are conceived under canvas during the last weekend in April.

San Isidro would be dead chuffed!