FREE unlimited WiFi is to be rolled out at 46 Spanish airports by the end of the year. 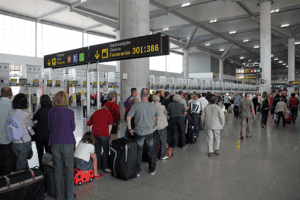 AENA, the country’s national airport authority, said in an official statement that it would also be quadrupling the current speed of the internet service available to passengers.

A bidding process will now begin to contact a company for two years by October, with the agency aiming to have the free WiFi available two months later.

An official statement said: “Offering free Internet access via WiFi in airports is yet another step in Aena’s commitment to the development of digital passenger services.”

The free connection will most likely be combined with a paid-for premium service, which is already available for passengers in need of higher connections speeds.

Malaga airport, like 37 others in Spain, currently offers 30 minutes of free WiFi through AENA’s contract with Kubi Wireless, which it won in April 2013.