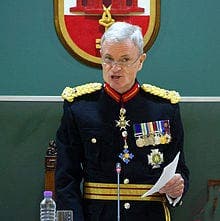 GOVERNOR of Gibraltar Sir James Dutton has quit after failing to tackle Spanish aggression over the rock.

Sir James ended his term in office less than two years after taking the job.

The decorated former soldier will step down with a replacement needing to be instated by the Foreign Office by September.

Sir James said he was frustrated in his role and felt he had been ‘sold a duff’.

Border tensions and water incursions between the Spanish and Gibraltarian authorities are being cited as the former lieutenant’s reasons for departure.

Britain and Spain have been embroiled in a centuries-old row over the sovereignty of the Rock.