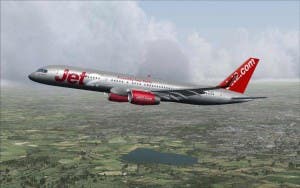 HOLIDAY is a time for relaxing, having a few drinks and kicking back.

But it seems some tourists are taking this too far with rowdy mishaps on flights to Spain.

A Jet2 flight from Leeds Bradford to Alicante was redirected to throw a passenger off in Toulouse for ‘drunk and abusive behaviour’.

The man in question Grant Marshall has been issued a lifetime ban from flying with Jet2 and he may have to foot the bill for the unplanned stopover in Toulouse.

Marshall was part of a group of 14 who were reportedly consuming illicit alcohol, using intimidating language and threatening behaviour.

He was handed over to police in Toulouse and the plane continued to destination Alicante.

The budget airline is cracking down on bad behaviour on board and is publicizing its zero tolerance policy.

“We will not allow our customers’ holidays to be upset by an individual’s obnoxious behaviour,” said Phil Ward, Managing Director of Jet2.com.

“We will not hesitate to prosecute individuals where necessary.”

The news comes just weeks after another man was banned for life from flying Jet2 – this time for exposing himself.

Tom Washington, 22, was flying to Majorca and waved around a sex toy in imitation of the safety demonstration before exposing a tattoo on his private parts to passengers and staff.

The Grimsby man said the incident was ‘a giggle’.