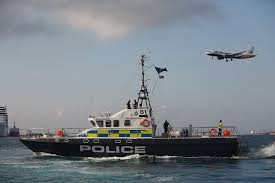 The coast guard picked up the men on the Straits of Gibraltar and chased them out of Gibraltar’s waters.

During the chase one of the jet skiers unloaded £150,000 worth of cannabis into the sea as they gave the police the slip.

The jet skiers, who are believed to have arrived from Morroco, were chased out of the British territory’s waters and were last seen heading towards Puente Mayorga, in Spain.