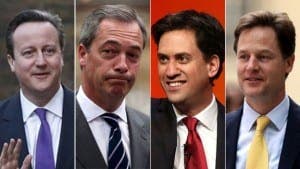 PRE-ELECTION coverage in the UK waxed lyrical about ‘the most interesting election for years’ and a result ‘too close to call’.

A surprise result it was: a Conservative majority in the House of Commons and an incumbent Prime Minister increasing the number of seats held in the house for first time in 90 years.

The other big news story of the night was the runaway success of the Scottish National Party (SNP), taking all but three Scottish seats.

We have seen the inevitable bloodletting since then, with the leaders of Labour, the Liberal Democrats and UKIP all resigning… and the almost immediate resurgence of Nigel Farage as UKIP leader.

I do have some sympathy for UKIP and the Greens, both of whom secured many more votes than the SNP  yet ended up with one seat each compared to the 56 that the SNP secured.

Perhaps it is time to ask whether the British “first past the post” electoral system is appropriate now that we have a wider range of parties to consider than ever. Thank goodness I am not a politician and don’t have to worry about these things!

What we should consider is the impact that this election result could have. Historically both Equity and Bond markets have performed better under a Conservative majority Government although the performance of both is ultimately driven by corporate profits and cash flow.

With the overall health of the UK economy looking to be in good shape now, (although we are not fully out of the woods just yet) we should be able to look forward to more positive times – but what does that mean for investors?

Firstly, the UK property sector should benefit. Some of the uncertainties caused by the threat of ‘Mansion Tax’ have lessened and there is potential for an increase in the Inheritance Tax threshold to £1 million.

There also remains the overall shortage of housing and so the sector should benefit and there is a huge knock-on effect from a strong property sector which often drives that often elusive “feel good factor”.

The only major uncertainty is over the UK’s membership of the EU, with a referendum promised by the end of 2017. There is a call for this to be held as soon as possible because of the negative effect of uncertainty.

If the UK were to vote to leave, would that really signal the end of UK-EU relationships? I doubt it. They would certainly change and there would be winners and losers, but let’s not forget, the European markets are also on the road to recovery.

However, there is still no sign of an imminent increase in interest rate. While this may frustrate investors, there are alternatives to deposit accounts worthy of consideration.

LATEST: What you need to know about Spain making face masks compulsory again even outdoors