IT was cameras, lights, action down at one of my favourite Los Barrios restaurants last week, when Canal Sur came to film a cookery spot for Este es mi Pueblo.

Every week the show features a different Andalucian chef giving a master class on a typical dish from their village.

Cue Jesus Acosta Blanco, award-winning chef of Al-Andalus in his best, Daz-bright cooking whites, ready to show the world (or the housewives of Andalucia) how to make Refrito Barreno, a dish handed down by his grandfather.

Farmhands used to prepare this stick-to-your-ribs bread-based soup over an open fire in the countryside during the planting season, chucking in whatever they found growing in the fields – asparagus, wild garlic, mushrooms  – and eating it from a communal wooden bowl, speared on the end of their pocket knives.

It had the makings of an interesting interview but, as the presenter explained when she arrived with her cameraman, there wasn’t time for ‘interesting’.  She needed brevity and clarity; tapas-sized portions of speech.

The cookery slot only gets two minutes of air time within the main show – barely long enough to list the ingredients. Talk about the sound bite society… if you tune in and miss it you probably blinked!

But what a palava! It took nearly two hours to film Jesus’ two minutes of fame. The creative chef in him was bursting to garnish his performance with insights and witty asides. But he was beaten into monosyllabic submission – like a spatchcocked chicken – and force-fed lines that made the Mushroom Maestro of Los Barrios sound indistinguishable from Fanny Craddock.

“Repeat this phrase after me: ‘Now we’re going to prepare a sofrito’.” ; “Go again, without the ‘hola’”; “and again but drop the ‘bueno’”;  “relax, breathe, stir, smile! The whole point is to be natural”…

After a dozen takes for Clone TV, ‘natural’ was a tall order – Jesus was wearing the glazed expression of an I’m A Celebrity Get Me Out of Here contestant after a Bush Tucker Trial.  And Refrito Barreno really is bush tucker!

But to give him his due, he didn’t utter the J-Word once (that’s the F-Word in Spanish) although it might have spiced up a show that clearly runs to the same tired (sorry) tried-and-tested formula, week-in, week-out.

That’s because Jesus is a true professional, who started washing dishes at nine, was among the first boys in his village to go to San Roque Catering School, and worked for Jose Banus (of Puerto Banus fame) at the Andalucia Plaza Hotel in Marbella, for eight years, before opening Restaurante Al-Andalus in Los Barrios, 39 years ago.

He’s got a Gold Medal from the Cadiz Hotels & Restaurants Association, too, but he doesn’t bang on about it. He’s more enthused by mushrooms. And this champinones champion has a wicked way with setas.

You should taste his chanterelle flan caramel and boletus tarte tatin – he makes puddings from mushrooms too! His caramelised death’s trumpets are to die for (although not literally).

As the Canal Sur team discovered after the ‘wrap’, when Jesus invited us all into the dining room for a free fungi fest. Well, he’s a fun guy!

Now that would make a programme. 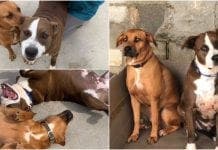 PUPPY LOVE: Appeal to home ‘Romeo and Juliet’ doggy couple who fell in love at first sniff at pound in southern Spain