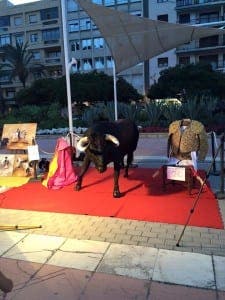 ALONGSIDE sun worshippers and holidaymakers, an anti-bullfighting protest was held on the paseo maritimo in Estepona.

Two activists staged a peaceful protest in reaction to the installation of a stuffed bull and the instruments used to kill the animal on the beachfront parade.

The exhibition owner alerted the police who arrived but allowed the protest to continue because of the right to protest in public place.

The Marbella anti-bullfighting association (Colectivo Antitaurino Marbella) intends to continue to protest in the coming days.

“The fact that bullfighting is funded in this country is shameful and we will not stop protesting until this cruel and bloody practice is abolished,” said a spokesman.