A BRITISH woman has died in a paragliding accident in the Cadiz province after her canopy unexpectedly folded in mid-air after take-off. 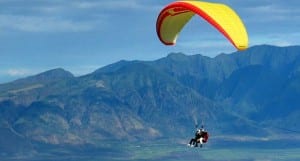 The 48-year-old, who was a resident in La Línea de la Concepcion, has been identified only by her initials, L.P.

Sources suggest that the woman was an experienced paraglider and was only 30 metres into her glide when the chute became entangled, according to witness reports.

She plummeted to the ground face-down and the impact of the crash meant she died instantly.

The area where she fell, in the Sierra de Líjar mountain range, was difficult to access on foot and required assistance from helicopters.

Firefighters were called at 2.45pm yesterday afternoon and took until 7pm for the woman’s body to be recovered.