GREENPEACE activists have kicked off the anti-gag law protest by draping a yellow banner which proclaims ‘protesting is a right’ off a crane near Spain’s parliament.

The Public Security Law ‘ley mordaza’ comes into effect tomorrow, July 1, and human rights groups and campaigners are set to protest up until midnight in Madrid.

It has generated widespread controversy, international criticism and raised issues over the freedom of expression.

“This law lacks justification, as there are no great problems of citizen security in Spain,” said Miguel Angel Soto, Greenpeace spokesman.

“The law is there to silence the voices that criticize the government’s leadership.”

The law will make many types of public gathering and demonstrations illegal and protestors will not be allowed to assemble outside Congress.

It will also permit the expulsion of migrants caught entering Spain’s African enclaves.

It would also more heavily control filming and photographing police.

“In less than 14 hours, it will be illegal to TWEET about a protest which has not been approved by the government in Spain,” tweeted Madrid-based expat Richard Shannon. 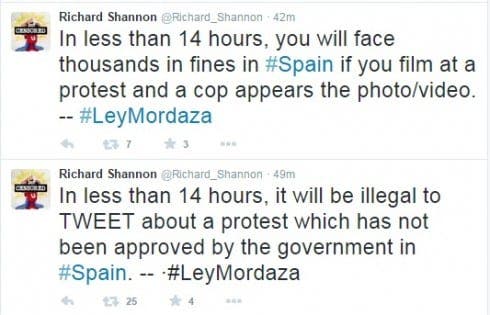 If a tweet contains a hashtag which publicizes a political event the government hasn’t authorized, it will be considered illegal.

The security law, which provoked the world’s first ever hologram protest back in April, could also lead to a €30,000 fine for unauthorised photographs of police.

Cristina Hodgson - 27 Sep, 2022 @ 09:15
TOURISTS have returned in force to Malaga City after the pandemic—with 315,000 overnight stays recorded during the month of August. This week the National Statistics...