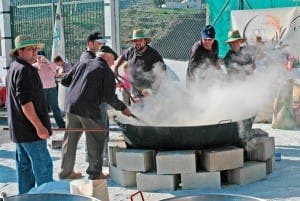 TRAVEL the back roads of southern Spain and it’s easy to believe that those slumbering villages have always been havens of peace.

But don’t be fooled. In the 19th century, the roads were so lawless that, in his book Gatherings from Spain, the English writer Richard Ford advised travellers to bring along ‘a decent bag of dollars’ to appease any highwaymen.

He also suggested carrying an impressive-looking time-piece, noting, ‘The absence of a watch can only be accounted for by a premeditated intention of not being robbed of it, which the ladrón considers as a most unjustifiable attempt to defraud him of his right.’

When you travel the rural byways these days, you can still be relieved of your cash. But the good news is that you will actually enjoy the experience thanks to the great food you can encounter in the most out-of-the-way spots.

A great place to start is the Venta de Alfarnate, as I discovered when I researched the coast and hinterland to the east of Málaga, exploring the Axarquía and the Costa Tropical, which lies in Granada province.

The Venta, claimed to be the oldest inn in Andalusia, lies on the old road from Málaga to Granada, the A6103. In a lonely spot backed by limestone crags, it has been welcoming weary travellers since 1691.

It’s a memorable place to enjoy a long lunch. Get there early at weekends as it becomes crowded by domingueros tucking into roast kid, partridge and pork accompanied by pitchers of wine.

Past visitors were not always as respectable. One day, as customers were tucking into gazpacho from a common bowl, a horseman arrived. Told there were no wooden spoons left, he used the crust of a loaf to scoop up the cold soup – then produced a pistol.

And so they did, for they recognised him as El Tempranillo, Andalusia’s most notorious bandolero.

Times were often hard in these parts. Migas, that belly-filling dish made with flour or breadcrumbs fried in oil, was a staple. During the olive harvest, a conch shell would be blown to inform the ravenous pickers that lunch was served and they would troop to the farmhouses to dig into bowlfuls.

Hardly gourmet food, but – if you really want to sample it – don’t miss the annual migas festivities in Torrox in December.

However, local cuisine has evolved a little since the arrival of tourism. Farmers have awakened to the fact that the sub-tropical climate – unique in Europe – allows the region to produce delicious tropical fruit. Avocados, mangoes and custard apples have been incorporated into the diet and are exported by the truckload.

Innovative chefs have introduced dishes unknown to the area a few years back, some with Moorish influences, such as roast lamb coated in honey (the bees feed on rosemary and thyme in the sierras).

Fresh fish is a fetish in this part of the world and that does not just mean barbecued sardines. Sole, squid, hake, red mullet and angler fish are on many menus, while gourmets along the Costa Tropical can’t have enough quisquillas of Motril, a particular type of shrimp.

In just a few years, the cuisine has become much more sophisticated; but penetrate the inland and you can still feast on traditional fare like choto con papas a lo pobre (kid with fried potatoes). Roast, fried or stewed, baby goat – in the past only served on special occasions – is prized as a true feast and hearty stews, including chunks of pork or chicken, are often on winter menus at remarkably low prices.

Every village has its speciality. Sedella boasts of its choto al vino (kid cooked in wine) and Periana of its dishes made with peaches. Almáchar devotes a special fiesta to ajoblanco  (cold almond soup) while Canillas de Aceituno has a Black Pudding Day.

Alfarnatejo prides itself on its cocido de garbanzos (chickpea stew), Iznate on its pots of runner beans and chickpeas, Canillas de Albaida and Cómpeta on their fennel stews.

Motril’s special dessert, known as Torta Real, originated with the Moors. It achieved national fame and royal approval during the reign of Alfonso XIII. Ingredients include almonds, egg whites and sugar, but the exact recipe remains a secret, zealously guarded by one family for some 200 years.

Naturally, many dishes are accompanied by wine and that’s where big changes are taking place. Málaga has probably the longest history of winemaking in Spain and, in the hills of the Axarquía, farmers still produce a vintage with methods that have barely changed in centuries.

Strong, sweet Moscatel is the typical local wine. But in recent years, with the introduction of new grape varieties and modern methods, there has been a revolution.

From the Axarquía to the Contraviesa mountain in Granada province, bodegas are producing palatable red and white table wines. Indeed, a number of these new wines have won rave reviews from international critics.

Vines are believed to have been cultivated here as far back as Phoenician times. It was the thirsty Romans who created many of the first vineyards, importing and planting numerous new varieties of grape. Columella, a Roman poet and agriculturalist, wrote about the area’s vines in the first century AD and Pliny and Virgil sang Málaga wine’s praises.

At one time, Málaga had 14,000 wine presses. But in the late 19th century the flourishing trade was dealt a death blow by a little bug known as the phylloxera. It wiped out entire vineyards. The Montes de Málaga, on the western edge of the Axarquía, never recovered and the whole area has been planted with trees.

In the whole province today only 6,000 hectares are planted with vines. Of those, about 1,000 hectares produce eating grapes and the rest, wine and raisins. The luscious raisins from the Axarquía are rightly famed — those who taste them say it feels as though their mouths are filled with sunshine.

Reason enough to explore the coast and sierras east of Málaga. Times have changed. No longer do you need to follow Richard Ford’s advice that you should ‘set forth from every tolerable-sized town with an ample supply of tea, sugar, coffee, brandy, good oil, wine, salt, to say nothing of solids.’

• East of Malaga – Your guide to the Axarquía and Costa Tropical by David Baird (new, updated edition),  €9.90, is available from bookshops, Amazon or direct from the publisher at www.maromapress.wordpress.com