A MAVERICK Andalucia-based British artist claims to be the ‘real Banksy’.

Londoner Michael Shurman claims he created the globally-known graffiti persona over a decade ago, but it was stolen from him.

Now ‘hiding out’ in a backwater of the Guadalhorce Valley, near Coin, he insists he is taking legal action against a group of leading British artists, who he believes, conned him.

“This is the biggest art story in half a century,” claims 52-year-old Shurman.

“I’m the real Banksy. Or should I say, I created Banksy and then it was stolen from me,” he told the Olive Press.

He continued: “There are some very powerful people behind this, including Damien Hirst and Tracey Emin.”

He insists he came up with the idea in the early 2000s entirely alone.

He claims that it was him who first painted ‘alien heads’ in Bristol and Glastonbury in 2004, an image which has become synonymous with Banksy.

He later daubed images on walls in Totnes, Devon, further accentuating the legend, that now sees original Banksys selling for up to a million euros each, with Brad Pitt and Angelina Jolie included as owners.

Now relocating to an isolated, rented home, where he continues to paint, he continued: “I have had over 120 works of art stolen over the last 10 years.

“People know I’m the real deal and they are all waiting for the lid to be blown on this.”

Having contacted Marbella legal company Lawbird this week, he now plans to go public with proof of his claims.

He is angry that a cabal of Britain’s leading art figures has conspired to get him banned from all the top UK galleries.

He added: “This time next year people will be talking about Shurman, not Banksy. “I’m going to pull the pants down on the whole scam.”

Last night, a spokesman for the official Banksy website denied the claims.

In a short statement, he said: ‘Shurman is not me’.

Numerous requests for a comment from Damien Hirst’s company were ignored. 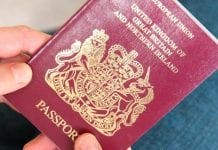 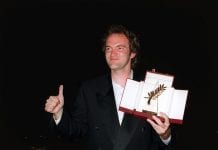 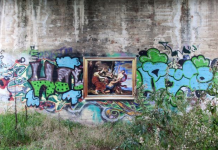