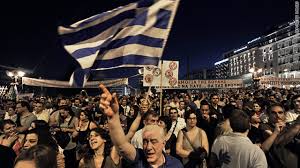 AFTER weeks of speculation, the Greek people have eventually shed some clarity on Greece’s troubles.

In a monumental vote, they said No to the austerity measures being forced upon them by the IMF (International Monetary Fund) and ECB (European Central Bank).

Despite the efforts of senior politicians like Merkel and Junker to save Eurozone blushes, the Greeks defiantly said ‘we cannot and won’t pay you back the money we borrowed’.

This Anti-Capitalism reaction isn’t surprising, the ECB and IMF took the ‘risk’ of lending Greece money, when in fact, the overall debt recovery was virtually impossible.

Let’s see how the markets react this week, with the ‘Grexit’ now firmly indicated by the Greek people.

Will the IMF and ECB U-turn on their firm stance, leaving the door open for Portugal, Spain and Italy to challenge their debt or austerity obligations?

Expect a week of high volatility in the financial markets, especially keep an eye on how the Euro reacts.

Charts and rates are available via the Plutus FX App.