I ALWAYS wear my billowing maternity-style dress in steaming summer temperatures, smugly satisfied that I’m literally ‘cooler’ than everyone else.

But, be warned this style of outfit should come with an embarrassment warning on the Costa de la Luz, where I spent a day holding down the hem, while loosely resembling an inverted lampshade.

Welcome to Tarifa, wind capital of Europe where the naughty levante breezes can play havoc with a girl’s dignity.

Luckily, no-one gives two hoots, as they get on with their day, shopping, surfing, kitesurfing. Oh and looking incredibly cool.

While the wind might be set to Beaufort Scale-blustery, the natives are as serene as a summer snooze, and the tourists (most of them) radiate a distinct sense of style.

With the ratio of dreadheads to skinheads set at approximately one to one, and flip-flops the established dress code, the easy-living, good-time vibe is impossible to miss.

Tarifa is rammed with kooky cafes, funky surf shops and boutiques full of sun-bleached and wind-bronzed thrill-seekers taking some time off.

But while the cobbled pavements and airy courtyards are rammed with them in summer months, luckily the locals ensure the town doesn’t lose its heart off season.

I meet some of the old guard as I scale a hilly Moorish passage in the old town and happen upon four cosy Spanish ladies gathered in a front room which stinks of acetone.

I’m impertinent enough to stare and Loli – lady of the house-cum-salon – invites me in, plonks me down and embarks on an unsolicited (but much-appreciated) manicure for the princely sum of €4.

“It’s just a chiringuito, really,” she laughs, flummoxed when I ask the name of her homely salon, before baptising it on the spot ‘Salon de Marilu’, after her daughter.

“We’ve lived here all our lives,” explains Lola, “If I won the lottery maybe I’d get a place in Malaga for the winter, but summer here is truly magical.”

Chattering with these women in their unpretentious hideaway gives me a behind-closed-doors glimpse of the old Andalucia in a town that has seen huge changes over the last decade.

Tarifa was the first point of the Moorish invasion in 711 AD. But Sancho IV El Bravo, whose statue still keeps vigil below the battlements of Guzmán Castle, wouldn’t recognise the town he reconquered in 1292.

Behind him, another fast ferry is departing the port for Tangier to join the daily traffic jam in the Straits, one of the world’s busiest shipping lanes.

The 14-kilometre crossing takes just 35 minutes so you can do Tangier easily in a day. It is certainly very tempting.

I have had a long affinity to the town as it happens. My first memory of Tarifa came in a series of aircon-less road trip holidays with my family, where we conquered a huge chunk of Spain’s most emblematic corners.

On one trip, aged nine and deeply ensconced in Harry Potter and the Prisoner of Azkaban, I was oblivious to the wondrous views as we passed from Malaga into Cadiz and dipped down towards Tarifa’s endless white sandy beaches, where the Atlantic kisses the Mediterranean.

I recall being bundled out of the car on an overcast day – with similar wardrobe malfunctions – to a greying, tired town swarming with ‘looky-looky men’.

Things certainly looked up when I coerced my mother into buying me a turquoise handbag from a street stall, but I don’t remember much else.

Fast-forward 15 years and, although the wind continues to buffet the town’s ramparts, the sun has shone favourably on Tarifa.

The Atlantic beach strip, the beaches Los Lances and Valdevaqueros, has become a fashion catwalk for the Hawaii 5.0.set with their Billabong T-shirts and Rip Curl board shorts.

Watching them lug their kitesurfs into the water to turn tricks above the waves is the best free show in town!

Other high-adrenalin sports like scuba diving, quad biking and hang gliding, and the more gentle pursuit of whale watching, have ushered in a prosperous new age, creating a polyglot society that has honed the Spanish charm without suppressing it altogether.

Surfers Residence, where I spend the night, is the brainchild of a group of young, charismatic German kite surfers cashing in on the booming tourist demand; among them, Tonia, whom I meet by chance in the tourist information office.

She came to Tarifa in 2013 to do her kitesurfing instructor qualification and never left.

I also meet blues band ‘Us’: Bob from Los Angeles, Paco from Tarifa and Alberto from Buenos Aires serenade tourists in the bunting-festooned Plaza del Oviedo at dusk.

After a chat, a photo and a hug, their street performance sets me up for an onslaught on Tarifa’s vibrant nightlife among the bars and clubs of Calle Cervantes.

Next morning, bleary-eyed but upbeat at how many people you can meet here in just a few hours, I burn up the coast towards the capital of Cadiz through a kaleidoscope of colour.

It is a stunning spot and from a distance, the people scaling its iconic dune – the largest on the continent – look like ants.

In the foreground you mustn’t miss the architectural ruins of Baelo Claudia, dating from 2BC.

Meandering between the Roman columns, it doesn’t take a novelist’s imagination to picture toga clad townsfolk socialising in the forum or detect the fishy scent of its tuna industry (making a paste called Garum) perfuming the air.

I hop over a barrier to get a better shot of the forum, to the fury of my law-abiding fellow tourists who are using selfie sticks.

But my triumph is short-lived. I get a telling-off from a small army of whistle-blowing caretakers lurking in the shade, who look set to drag me off site like a slave girl.

Half a Fanta on the beach, before the wind whips my can off the table, followed by an invigorating dip in the Atlantic restore my spirits.

Trailing back along the coast with salt and sand in my hair, I stop off at several beaches: quiet Rio Jara, party central Arte Vida and Punta Paloma where I slap myself all over with mud, the ultimate DIY spa experience.

Days like this really do bring out the best of the Costa de la Luz: an effortless, unspoilt and – as yet – relatively undiscovered stretch of beauty, with an open-minded crowd up for sharing it.

If Cadiz capital is intent on being the jewel in the Costa de la Luz crown, Tarifa is her jingly-jangly silver anklet – less precious, but unequivocally more rewarding in high winds.

And talking of windswept, don’t forget your Bridget Jones knickers if you’re planning to wear a dress… 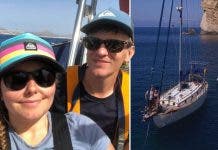