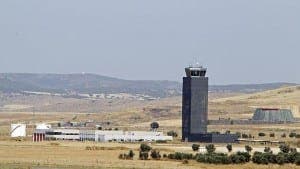 CIUDAD Real ‘ghost’ airport, built when Spain’s economy was flying high, will be sold for 100,000 times less than it cost to build.

The bid was placed by a Chinese-led consortium of investors, Tzaneen International, which wishes to provide a European gateway for Chinese companies.

A spokesman has claimed the consortium plans an investment of between €60 and €100 million in the airport.

But he group could be outbid if another buyer steps in since the receiver had set a minimum price of €28 million.

The reserve price was initially set at €80 million but was withdrawn after the ‘Don Quixote’ airport received no takers and little interest by July 10.

The airport 235 km south of Madrid opened in 2008, went bankrupt four years later and has since been considered a monument to Spain’s overspending.

Another unused Spanish airport is Castellon which cost €150 million to build, opened in 2011 but never received a single flight.