UP to 100 people have been left without water as the worst heatwave in over a decade continues to hit Spain. 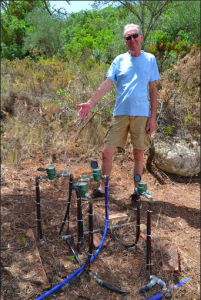 Residents, including pensioners and children, have gone for as long as eight weeks without water across parts of the Axarquia.

As many as 100 people are reportedly waterless in Colmenar, while homes in Velez-Malaga have also been left dry.

A lack of preparation by new mayors, Antonio Ferrer and Miguel Novoa is now being blamed for the water outage.

“It is not safe to let people go without water for so long, especially the elderly and children.”

He added: “They promised us water supplies two weeks ago, but the taps are still dry and the water trucks are nowhere to be seen.

“The mayor should have had a solution in place.”

A spokesman for Colmenar town hall said that there is ‘always problems with water in the area’ and confirmed that workers are trying to restore water flow back to residential areas.

However he declined to comment on exact support for those cut off.